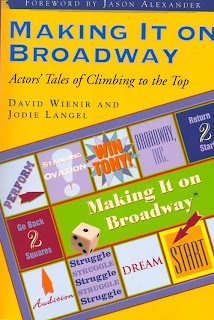 Labor Day, which comes late in the calendar this year, signals that summer is about to end (tears) but also that the fall theater season is about to begin (big cheers). Of course the day itself is set aside to honor working stiffs.  And, as has now become an annual tradition here, the theater lover in me considers that an opportunity to salute blue collar actors—the folks at the bottom of the Playbill, the ones who trek across the country in national tours and those who do off-off Broadway shows for love because there usually ain’t much money in it.

In a season when theater lovers are scrambling to get tickets to see Jude Law and Philip Seymour Hoffman do Shakespeare, Daniel Craig and Hugh Jackman play cops and Cate Blanchett take on Blanche DuBois, it’s easy to forget that most actors are journeymen battling against the odds to make a living in the career that they consider a calling. Even stars like Law, Hoffman, Craig, Jackman and Blanchett started off that way.  And that struggle to make it is the subject of an engaging book called “Making It On Broadway: Actors’ Tales of Climbing to the Top.”

Authors David Wienir (an entertainment lawyer) and Jodie Langel (an actress whose credits include ensemble work in Les Misérables and other shows) have constructed the book as a tour through the phases of every Broadway actor’s life: the first shows they saw as kids and the decision to go into show business, the move to the city and the first open calls and auditions, finding day jobs and getting an Equity Card, the first Broadway show and the scarcity of gigs that can follow it, even after winning a Tony. The stories are excerpts from interviews with 150 actors.  Marquee names like Chita Rivera, Donna Murphy, John Rubinstein and Antonio Banderas participate, as well as scores of below-the-title folks.

Some of the tales are amusing. Marissa Jaret Winokur, who won a Best Actress in a Musical Tony for Hairspray, recalls an earlier part in a children’s theater show about nutrition in which she played a character called “Okra Winfrey.” But this isn’t one of those starry-eyed books about the glories of being in show business.  Instead, there’s a lot of unvarnished talk about things like the monotony of long runs and the deadening effect of performing in mediocre shows (“When I was in Grease, I felt like I was trapped,” Hunter Foster confesses.  “I was unhappy because I was unfulfilled”) as well as the frustration and humiliation of always having to look for work (Donna McKechnie tells of auditioning for a part that called for “a Donna McKechnie type” and not getting the role.)

Reading “Making It on Broadway” is like eavesdropping on after-the-third-drink conversations among actors at the theater watering holes Joe Allen or Angus McIndoe.  What keeps these folks going is their love of the work.  What we usually love about them is their talent and how well they use it to entertain us.  But this Labor Day weekend, I applaud their fortitude as well.

It's a fascinating book - I just wish it wasn't musical theatre specific. Though it is interesting to hear how the mega musicals wanted cookie cutters only, especially the one where it was "no acting allowed" or you were shunned.

I was legitimately skeeved by Ken Page's satanic apartment anecdote.

Thanks for the nice review!