"Into the Daylight" Fails to Shine 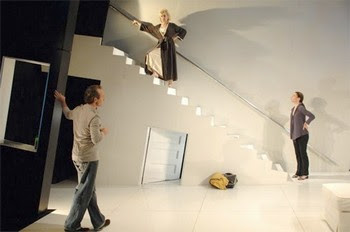 Some of my best memories in the theater were created in the old Promenade Theater at Broadway and 76th Street. It saddened me when it closed three years ago to make room for a cosmetics store. So I carried some residual good will with me when my husband K and I went to see In the Daylight, the new thriller that opened at the McGinn/Cazale Theatre which is now in that same building, albeit not the same space.

The new theater is named for—and its lobby is decorated with photos of—the actors Walter McGinn and John Cazale who died within a year of one another in the late ‘70s when both were only in their early 40s.  McGinn’s biggest role was playing the alcoholic former jock in That Championship Season and while Cazale did a number of off-Broadway shows in the ‘70s, he is best known as Fredo Corleone, the weak, middle brother in “The Godfather” movies, and as the early love of the young Meryl Streep.

It’s not easy to get to the McGinn/Cazale. You have to take an elevator to the third floor and then walk up a flight of stairs. I wish I could tell you the trip was worth it.  But In the Daylight’s playwright Tony Glazer falls into the trap that trips up so many young playwrights:  too much self-conscious style and not enough substance.

In the Daylight centers around the uneasy reunion between a writer, who moved across country after his father’s mysterious death, and his mother and sister, who stayed behind in the family home with an urn filled with ashes that sits on a side table. Essentially, a standard-issue dysfunctional-family drama, the play also ambitiously takes on the publishing business (the son has written a not-so-truthful bestselling book about the incident)  and Big Pharma (the dad’s company researches and markets cancer cures). The problem is that Glazer doesn’t really have anything fresh to say on any of these subjects.

Over the course of the 100-minute play, secrets are revealed, witticisms are cracked (although they aren’t nearly as clever as Glazer seems to think they are—“I haven’t had a date since Bill Clinton was impeached,” the sister laments) barrels of liquor are consumed and a gun appears, and following Chekhov’s dictum, is fired.  Both fight choreographer Qui Nguyen and special effects designer Arielle Toelke deserve special kudos for the smartness of the latter scene.

But it’s probably not a good thing when the most dramatic moments in a play come from  its technical staff.  Scenic designer Christopher Barreca grabs attention with a set in which everything is tilted to signal that something is off-kilter in this household.  But so much imagination seems to have gone into that concept that there was little left over to figure out where the actors would sit and how they would stand. Meanwhile, sound designer Elizabeth Rhodes and lighting designer Thom Weaver open the play with a thunderstorm so tumultuous that K leaned over and asked if the play was supposed to be set during Hurricane Katrina.

After all that literal sturm und drang, the rest of the play can't help but be anti-climatic. None of the actors seem to be having nearly as good a time as the designers so obviously did. One kept stumbling over her lines.  Ashley Austin Morris provides a few minutes of campy fun as a mysterious stranger who braves the storm to visit the family but she’s quickly burdened with so much exposition that she becomes as leaden as the other characters.

Maybe a more naturalistic approach might have worked better.  Or maybe you really can’t home again.

Labels: In the Daylight