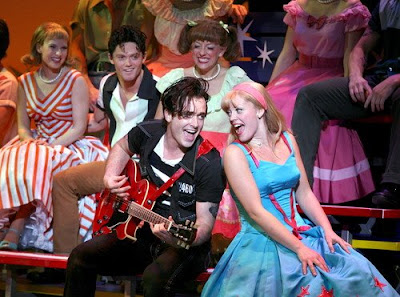 There weren’t a lot of surprises when the Tony nominations were announced earlier this month. Except maybe that Cry-Baby had won a shot at the Best Musical award. It’s not a terrible show and people who see it will probably have a good enough time (click here to see excerpts from the show). But, with one exception (Rob Ashford’s high energy choreography), it isn’t an award-caliber show either. What it is is simply another homage to the Fifties.

Which raises the following question: hasn’t the time come for Broadway to declare a moratorium on plays and musicals about the Fifties? This past season alone, A Catered Affair; Grease; Come Back, Little Sheba; The Country Girl; Thurgood and, of course, Cry-Baby, were all centered around events that took place in the post-War period between 1946 and 1964 and I’m not even counting leftover shows like Jersey Boys. And then there’s Happy Days, a musical version of the old TV series about life during the Eisenhower era that is currently playing at the Goodspeed Opera House in East Haddam, Connecticut.

Why all this looking back? And why to that period? I can’t believe it’s because people feel that the music back then was so great. Is everyone really all that nostalgic for the supposedly more innocent era of ducktailed bad boys and poodle-skirt wearing good girls? Or is Broadway trying to make up for the fact that it overlooked rock and roll when it first arrived on the scene? Whatever the reason, isn’t it time to move on?

And while I’m making suggestions, it probably isn’t such a good idea either for Broadway to pick up the Hollywood bad habit of trying to make sequels to successful shows. The current thinking seems to be if The Producers or Hairspray sell well, let’s see what other Mel Brooks or John Waters movie we can turn into a cash-cow musical. Well, you didn’t see Richard Rodgers and Oscar Hammerstein turning to other states after their Oklahoma was a hit.

Cry-Baby suffers in comparison to its predecessors—both the other '50s shows now on stage, and the movie that spawned it. The show’s publicity campaign makes much of the fact that the score is by David Javerbaum, executive producer of Jon Stewart’s “The Daily Show”, and Adam Schlesinger, a founder of the rock band Fountains of Wayne. And it is great that guys with such hip credentials are interested in working on Broadway but it’s also clear that here, they are simply guns for hire. Even so, several of their songs are clever enough that I’d like to see what they’d do when given free reign.

A more charismatic leading man might have diverted attention away from the show’s shortcomings or given it the kind of edge Johnny Depp did in the movie version. James Snyder, making his Broadway debut, works hard and sings well but his Cry-Baby tends to get lost in the crowd when the ensemble is on stage. I can’t help thinking what someone like Cheyenne Jackson (now starring in Xanadu and in a zillion chatroom complaints about why he didn’t get a Tony nomination for his role as that show’s muse-needy artist Sonny) might have done in the part of Cry-Baby. Although he's probably had his fill of the Fifties too, having already done All Shook Up, the ill-fated juke box musical based on Elvis songs.

I completely agree about a more charismatic lead for Cry-Baby. I was thinking the same thing about both the male AND female leads when I saw this show. Don't you think a younger actress would have worked better for the Allison part? Might have made the dramatic tension between the leads more interesting and the Cry-Baby character seem more dangerous. The show as a whole smacked of been there, done that. You know, I think almost any of John Waters's other films would have made better source material than Cry-Baby. Now Female Trouble would be something to see as a musical! Absolutely time for Broadway to move on. Thank you for another interesting post!

Don't forget about all the nostalgia for the 1920s on Broadway in the late '60s and early '70s: "No, No, Nanette" revival, "The Boyfriend" revival, "Follies," and "Dames at Sea" just to mention a few.

Granted this trend for the '50s started on the heels of those shows with the original production of "Grease."

Yeah, I agree with you about James Snyder. He doesn't really stand out enough, or establish a strong enough character. Somehow I wanted him to seem badder, more dangerous. The whole thing just felt kind of blah.