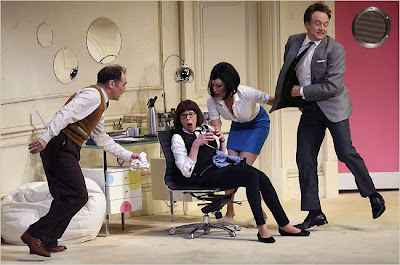 Farce is not my favorite form of theater. The silly gags, the slamming doors, the broad sexual innuendo usually do nothing for me. And yet, I confess I had a laugh-out-loud good time at both the Mark Twain play Is He Dead?, which closed far too soon after just 105 performances in March; and the new British import Boeing-Boeing, which I think will get the chance to play much longer.

Boeing-Boeing is set in the early ‘60s and centers around Bernard, a stereotypical swinging bachelor who is engaged to three beautiful flight attendants and orchestrates his trysts with them according to the airline timetables (which, of course, today are often a farce themselves). When each of the women’s carriers switches to the then-new Boeing super jets, their schedules become unpredictable, they all show up at the same time and hilarious havoc ensues.

The play, written by the late Marc Camoletti, was originally produced in France (appropriately enough since that country is considered the birthplace of the art form that was perfected by Molière and Georges Feydeau). Boeing-Boeing ran for 19 years in France and is, according to the "Guinness Book of Records," still the most performed French play around the world. The Brits have been particularly crazy about it. A production opened in London in 1962 and went on to play 2,035 performances. And last year, a revival opened there and drew a fresh round of raves.

American audiences have been tougher to please. A Broadway production played just 23 performances in 1965 and a movie version later that year with Tony Curtis as Bernard, Jerry Lewis as his naïve best friend Robert and the always-wry Thelma Ritter as the housekeeper who is a reluctant accomplice in keeping the women apart also crashed. But this new production, which opened last week at the Longacre Theatre, seems to have achieved lift-off. Most of the reviews have been filled with lofty praise and yesterday the show won six Tony nominations including Best Revival of a Play, Matthew Warchus for Direction, Rob Howell for Costume Design, Simon Baker for Sound Design, Mary McCormack for Best Featured Actress in a Play, and Mark Rylance for Best Actor.

Rylance, the acclaimed Shakespearean actor who was the artistic director of the Globe Theatre in London for 10 years (click here to see an excerpt from an excellent New Yorker profile of him) is the only import from the British production and his comedically brilliant performance as the unworldly Robert anchors the show. But everyone in the production works hard (click here to see excerpts from the show). Rob Howell’s cartoon-colored and mini-skirted uniforms for the stewardess draw laughs all by themselves and Howell, who also did the set, has create a perfectly modish backdrop for the de rigueur slamming doors. Although McCormack deserved her nomination for the daffy German fiancée, Gina Gershon and Kathryn Hahn as her Italian and American counterparts are also giddy delights. The choreographer Kathleen Marshall was reportedly even brought in to stage the "Laugh-In"- style curtain call; the first time I can remember anyone being credited with that job.

Sometimes the sweat shows. Bradley Whitford of TV’s “The West Wing” literally climbs the walls to get his laughs as Bernard and Christine Baranski summons every ounce of her trademark deadpan drollery to make the role of the housekeeper work even though, as my regular theatergoing buddy Bill observed, she’s far too chic for the part (Rhea Perlman played the role in London). But in the end, the audience—even the farce-adverse like me—is forgiving because everyone on stage seems to be having such a good time and to be so genuinely intent on making us have one too.

Of course I was in a good mood even before I got to the Longacre because Bill and I had dinner at Sardi’s with my fellow bloggers Steve of Steve on Broadway and Esther of Gratuitous Violins, who were in town to catch up on some shows. As you’d expect, much of the conversation was taken up with theater gossip (we were all still scratching out heads about what had convinced its producers to bring the universally panned and instantly closed Glory Days to Broadway) and what we’d recently seen (Steve had just returned from London where he’d seen the much-scorched Gone with the Wind; click here to read his review). It was a few days after Esther’s birthday and so we celebrated that too, complete with a serenade from the Sardi’s waiters.

Then, Steve and Esther went off to see Macbeth (also a multi-Tony nominee) while Bill and I headed for Boeing-Boeing. “I wish we were seeing Boeing-Boeing,” Esther had confided in one of the emails we exchange before meeting. It wasn’t, of course, that she doesn’t appreciate a good tragedy. But anyone who knows actors or even has read deeply about them knows that even the most serious thespians would trade their first born for the challenge of a good comedy role. “Dying is easy,” goes the saying. “Comedy is hard.” The folks in Boeing-Boeing don’t quite make it look easy but they do make it fun to go along for the ride.

Glad to hear you enjoyed the show. I've seen it twice now and thinks it's just hysterically delightful. Too bad there isn't an ensemble Tony award because the entire cast (of 6) deserves such an honor. Macbeth was wonderful in it's own way as well, but sounds like your mirthful evening was the perfect preamble for something like Boeing-Boeing!

Jan,
I'm so glad you had a good time at "Boeing-Boeing." From everything I've read, it sounds terrifically funny. As for Macbeth, well, I'll be writing about it. But suffice to say the gore was oversold. I didn't feel squeamish at all!

Much thanks to you and Bill for the dinner, the birthday wishes, and most of all, for the great conversation.

It was fun. And I thought Mark Rylance was brilliant. Thanks for your notes about the history. I was trying to remember who was in the film.

Jan, Now that I've posted my own review, I finally read yours and was surprised by the many parallels between both.

Although I didn't specifically mention it, perhaps the thing about Bradley Whitford's performance that made him less than convincing in my eyes was the amount he had sweat long before the real escapades had even started. In my humble estimation, he needed to be cooler than a cucumber early on - after all, if he's such a lothario, wouldn't he be?

Just one other quick point - Rhea Perlman actually replaced the immensely talented Frances de la Tour in the London production. Given the latter actress' amazing facial features, I would have loved to have seen her in the role of Berthe. I only hope she'll be coming back to Broadway soon.

Thanks to all of you for your comments, and particularly to Steve for the correction on who originally played the maid in the London production. It helps explain the Baranski casting since she and and Frances de la Tour share a certain droll quality. But de la Tour brings an extra world weariness to the party and just the thought of her playing the part makes me smile. So I'm with you Steve, I would have loved to have seen her in the role.