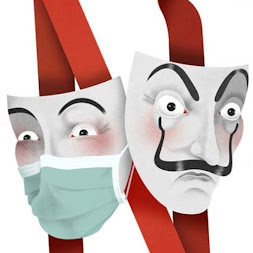 Traditions are important even—maybe especially—in troubled times. And so although theaters remain dark and I’ve been posting here infrequently, I’ve decided to go ahead with my annual Labor Day salute to some of the people who make the theater we all love. In the past, I’ve celebrated actors, playwrights, drama teachers, casting directors and theatrical unions.  But the choice was a no-brainer this year because I’m in awe of all the performers who despite having had the thrill of opening nights and the security of long runs pulled out from under them by the coronavirus, continue to entertain us with online concerts, readings, Zoom productions, panel discussions, podcasts and other interviews (an extra grateful kowtow to Seth Rudetsky and James Wesley for their tireless work on “Stars in the House”; click here to see what they've been doing).

Even more impressively, most of these appearances and performances have been done pro bono to help out one charity or another, which means the performers were paid little or nothing. But just like the rest of us, they need to pay rent and mortgages, to put food on the table and clothes on their kids. So instead of stringing together a whole lot of words about how much I appreciate them, I’m going to show my gratitude by writing a bigger-than-I-can-afford check to The Actors Fund, which provides assistance to all of the essential theater workers who make shows, from headliners to stagehands, and has already given out some $15 million to over 13,000 of them so far this year.  And I’m also going to ask you to send the Fund as much as you can too, which you can do my clicking here.

In the meantime, my pals at BroadwayRadio have invited me to join them this coming Sunday in a discussion about our favorite shows about working stiffs of all kinds, which you can listen to by clicking here.

Update:  At the end of the “This Week on Broadway” episode on plays about working James Marino promised that he would link to the list I’d assembled (with the always invaluable help of my theatergoing buddy Bill, whose contributions I've highlighted in red) and so I’m posting it below. As you’ll see, the list is play-focused, although I’ve added a few musicals at the end:

Anna in the Tropics by Nilo Cruz

Cuban immigrants working in a Florida cigar-factory hire a “lector” to read to them and relieve the boredom while they work but his narration of “Anna Karenina” leads to turmoil and tragedy in this 2003 winner of the Pulitzer Prize for Drama.

Headland, who once worked for Harvey Weinstein, chronicles the emotionally abusive relationship between a tyrannical boss and the underlings who struggle to cater to his every whim.

The warehouse of a big-box store provides the backdrop for the stories of two young workers, one a rich kid trying to find purpose in life, the other a local guy trying to keep from being overwhelmed by an alcoholic mother and a dying town.

An indie film crew works hard to get in a final shot of the day while dealing with a first-time director, a peevish screenwriter and a temperamental star.

The Desk Set by William Marchant

A 1950s comedy about a group of female research librarians who fear they may be replaced by newly-developed computers.

Three aged haenyeo, female Korean deep-sea divers, engage in the traditional but grueling work of harvesting seafood without the aid of air tanks or any other scuba equipment, while a New York playwright struggles to tell their story in this meta-drama.

The Flick by Annie Baker

Three lost souls in a rundown movie theater try to figure out their lives as they clean up the soda cans, popcorn boxes, condoms and other filth customers leave behind in this 2014 winner of the Pulitzer Prize for Drama.

A thirtysomething middle-manager and a sixtysomething worker attempt to navigate the soul-crushing work of the shipping center of an online retailer.

A young actor tries to manage his day job as the reservations clerk and jack-of-all-trades-nobody-else-wants to-do at a hot restaurant in this one-person comedy.

Gary: A Sequel to Titus Andronicus by Taylor Mac

Two servants are tasked with cleaning up after the bloody massacre at the end of the eponymous Shakespearean tragedy in Mac’s comic meditation on how to save a world that's collapsed into chaos.

Real estate agents push way past the limits of propriety as they try to make their monthly quotas in this Pulitzer-Prize winning vivisection of the American Dream.

An ordinary day in an ordinary office turns into a cautionary tale when a too-often-overlooked worker takes revenge.

After a cashier at a dollar store is fired for being late, she tries to reconnect with old boyfriend who has done better in life.

A gypsy cab office provides the setting for this drama about the romantic and filial relationships of a group of drivers working for a car service trying to stay afloat in a gentrifying neighborhood.

A female ex-con experiences shunning by her son, sexual harassment and despair when the only job she can find is on the killing floor of a cattle slaughterhouse.

The Kitchen by Arnold Wesker

A day in the life of the stressed kitchen crew of a café that plays out in real time.

The Lehman Trilogy by Stefano Massini

The rise and fall of the Lehman Brothers investment firm.

A fact-checker takes on his magazine’s star writer in this comedy based on the authors’ own experience.

Security guards and shady cops clash in this workplace dramady about criminal justice, racism and sexism.

A bio-play about the tabloid journalist Mike McAlary.

The desperate lives of non-unionized workers trying to make it through the holiday season at a big-box store for just $5 an hour in the mid-‘90s.

The Pitman Painters by Lee Hall

The author of Billy Elliot recounts the story of the real-life coal miners who became minor celebrities before WWII after taking an art history class and becoming painters themselves—and, in the process, realizing the different opportunities given those in the upper and lower classes.

Tensions rise in a medical office when the doctor promotes a white worker over her Black colleague and the two women fall into a war of passive aggression.

The Receptionist by Adam Boch

The titular character is having a typically mundane day until someone from the home office shows up and the ominous doings of her firm are slowly revealed.

It’s art versus commerce when a talented but temperamental chef clashes with his business partner over the direction of their restaurant.

Four workers in one of the last automotive stamping factories in Detroit face the possibility of layoffs in the midst of the 2008 recession.

Based on interviews with real-life workers in one of the poorest counties in the U.S., this drama focuses on an interracial group of friends whose relationships are strained when their factory threatens layoffs. It marked Nottage’s Broadway debut and won her second Pulitzer Prize.

To the Bone by Lisa Ramirez

A drama about Latina immigrants, some undocumented, working in an upstate New York poultry factory and trying to figure out how much they should—and can—stand up to their bosses.

A ship worker’s sense of self is disastrously shattered when the daughter of an industrialist casually dismisses him as “a filthy beast” in this allegory about the dark side of capitalism.

The Adding Machine by Elmer Rice; 1923

A meek accountant murders his boss when he learns that he’s going to be replaced by an adding machine and ends up in purgatory in this Expressionistic drama that was adapted into a musical in 2007.

The Front Page by Charles MacArthur and Ben Hecht; 1928

A group of reporters go all out in pursuit of a story in this comic send-up of tabloid journalism and crooked politicians.

Waiting for Lefty by Clifford Odets; 1935

Cab drivers try to decide whether to strike for higher wages in this landmark drama inspired by a 1934 New York City taxi strike.

Death of a Salesman by Arthur Miller; 1949

An aging traveling salesman with delusions of grandeur is brought low when he is let go by the firm where he’s worked for decades in this Pulitzer Prize-winning masterpiece.

How To Succeed In Business Without Really Trying

Sunday in the Park With George