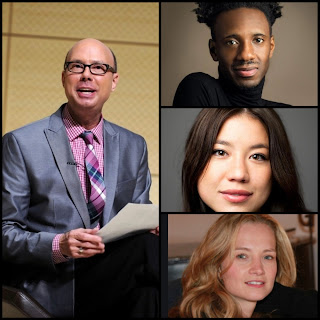 No review post this week (although if you have a chance you should try to catch Talene Monahon’s How to Load a Musket, a really thought-provoking play about historical reenactors and the fractured ways in which we all view America history, which is running through next weekend at 59E59 Theaters).

But what I really want to do is give you a heads-up about the terrific panel that the Outer Critics Circle will be presenting at this year’s BroadwayCon to kick off a year-long celebration of the 70th anniversary season of the organization composed of New York-based theater writers and reviewers for a variety of print and online publications.

The panel will celebrate some great young playwrights, which is something the group has been doing for a long time. In 1967, the OCC established the John Gassner Award, named after the group’s founder and created to give a boost to promising playwrights at the beginning of their careers. Past honorees have included John Guare, David Henry Hwang, John Leguizamo, Lynn Nottage, Aaron Sorkin and August Wilson.

It's probably immodest of me to say that the upcoming BroadwayCon panel is just as terrific since I sit on the executive board of the group and am an organizer of the panel.  But the truth is the truth and it is a terrific lineup.

Moderated by Richard Ridge, my fellow OCC board member and the host of Broadway Worlds’ “Backstage with Richard Ridge,” it will celebrate three of today’s most exciting playwrights: Donja R. Love (Sugar in Our Wounds) and Ming Peiffer (Usual Girls) who were finalists for last year’s Gassner prize and Bess Wohl, who won the award in 2017 for Small Mouth Sounds and who will make her Broadway debut next week with the Second Stage production of Grand Horizons.

The four of them will get together next Friday, Jan, 24, at 11:15 a.m. in the Beekman Room at the Midtown Hilton to talk about the current golden age of playwriting. I'll be there too and I hope that those of you attending BroadwayCon (which, as you know, is great fun) will join us. You can find more information at: http://bit.ly/occ-con

Labels: BroadwayCon, How to Load a Musket