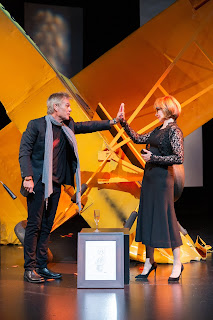 Yes, I know it’s not a Saturday when I usually post but the holidays and other end-of-the-year obligations have turned my schedule topsy-turvy. So I’ve decided to invoke my old practice of posting on a Wednesday because I’ve been thinking a lot about how we New York theater lovers sometimes forget that we aren’t the only ones in the country who appreciate theater. And just as folks in Texas love corn dogs and people in Philadelphia revere cheesesteaks, theater lovers elsewhere sometimes develop a taste for shows that don’t necessarily appeal to New York palates but still please others.

For example, the San Francisco-based playwright Lauren Gunderson has never had a show produced on Broadway or by one of the city’s big off-Broadway companies but she is now the most produced living playwright in the country, with 33 productions scheduled for the current season, including The Half-Life of Marie Curie, which ends its run at the Minetta Lane Theatre this weekend but will soon be available on Audible.

I’ve recently seen two other shows by playwrights who also seem to be thriving in other parts of the country but are newbies to the New York stage. And despite having attracted big-name casts, their shows—One November Yankee and Harry Townsend’s Last Stand—have been as warmly received by my critical brethren as corn dogs might be at a vegan banquet.

One November Yankee, which is running at 59E59 Theaters through this weekend, bares some of the blame for its opprobrium. The two-hander is a gerrymandered trio of vignettes featuring rotating sets of brothers and sisters.

Each of the pairs here are played by the ‘80s-era TV stars Harry Hamlin and Stefanie Powers. They both look great, each has done some theater in the past and neither embarrasses him or herself this time out (click here to read an interview with him). But, alas, the production around them doesn’t hold up its end.

Playwright Joshua Ravetch, whose program bio lists previous stage collaborations with Holland Taylor, Tyne Daly and Carrie Fisher, has directed One November Yankee himself and seems to have been oblivious to the limitations imposed by the small theater space in which he had to work.

A big yellow plane, its call letters give the show its title, dominates the set. The aircraft is supposed to be a conceptual work that an artist has created for a show at MoMA curated by his older sister; their anxiety over the show's opening gives the first scene its storyline. In the next, the plane is the downed vehicle in which two other siblings are stranded when it runs out of gas on the way to their father’s second wedding.

And the plane is lastly the wreckage that is just one of the things another brother and sister discover while out on a hike. But mainly the plane takes up so much space that there’s little left for Hamlin and Powers to maneuver around in. Even worse, however, is the fact that Ravetch hasn’t figured out how to transition from one scene to the next.

A screen is set up at stage right and flight-related images projected there are supposed to hold the audience’s attention while the actors race off to switch costumes and wigs. But the projector broke down during the performance my theatergoing buddy Bill and I attended, leaving stretches of nothingness.

Ravetch’s apparent desire to show the ineffable bond that exists between siblings is a worthy subject and one only sporadically explored onstage, as opposed to the more clichéd Cain-and-Abel style rivalries that usually pop up in family dramas.

And despite some very lame jokes, this production might have been effective if he’d brought in a more skillful director. Instead, audiences leave the theater trying to hammer his jigsaw pieces into some kind of meaningful whole.

At the opposite end of the spectrum, George Eastman’s Harry Townsend's Last Stand has the kind of clear narrative that often gets dismissed as “too on the nose.” This two-hander tells the story of an aging widower who is living alone in the Vermont vacation cabin he once shared with his beloved wife. But now in his 80s, he’s become dangerously forgetful. The play opens when his son arrives from California, intent on moving his dad into an assisted living community. 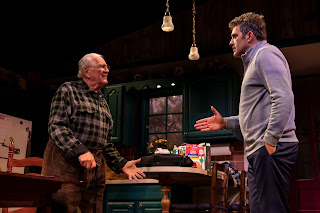 It’s obvious from the start how this is going to turn out but I didn’t mind taking the journey. And nor, judging from the grunts of recognition, did the audience that saw the show with me. Yes, it’s a familiar tale but that doesn’t mean that people dealing with this issue—as grown children or the parents they’re worried about—won’t find inspiration and maybe even a bit of solace from seeing it.

As the aged father, Len Cariou, himself 80, had a few moments when I couldn’t tell if the character or the actor was struggling to remember what to say but that only added to the poignancy of his performance (click here to listen to an interview with him).

Meanwhile. Craig Bierko offered stalwart support as the son. And together, under the sympathetic direction of Karen Carpenter, they crafted a convincing portrait of a moment that not even familiarity can attenuate.

And isn’t that one of the things art is supposed to do: show us how to cope with the stuff life throws at all of us.