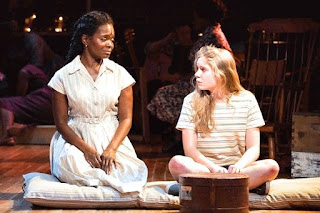 Should white people be allowed to tell stories about black people? The answer, of course, is yes. I’m a firm believer that stories about any of us belong to all of us. But I still found myself asking that question as I watched The Secret Life of Bees, the cliché-ridden musical that opened this week at the Atlantic Theater Company’s Linda Gross Theater.

The show is based on the 2002 novel by the white writer Sue Monk Kidd. It was a big bestseller and, six years later, was turned into a popular movie starring Queen Latifah, Jennifer Hudson, Alicia Keys, Sophie Okonedo and Dakota Fanning.

Like the book and movie, the musical is set in South Carolina at the height of the Civil Rights Movement and four of its five leading characters are black women. But the story is still primarily a bildungsroman centered on the fifth, a motherless white girl named Lily.

When the show opens, Lily (Elizabeth Teeter) is living with her abusive father and their black housekeeper Rosaleen (Saycon Sengbloh) who is both loyal and, as these tales tend to require, feisty. But after Rosaleen is beaten by white bigots for attempting to vote, Lilly persuades her that they should run away.

These you-go-girl versions of Mark Twain's Huck and Jim, find refuge with the Boatwright sisters, a trio of independent African-American women who raise bees, pray to a black Madonna and have a mysterious connection to Lily’s dead mother.

Duncan Sheik, a Tony winner for Spring Awakening, wrote the score; Susan Birkenhead, a Tony nominee for Jelly’s Last Jam, wrote the lyrics; Lynn Nottage, the only woman to win the Pulitzer Prize for Drama twice, wrote the book and Sam Gold, the Tony-winning director of Fun Home, staged the show. So you can see why I had high hopes for this one. But the tasty stew I’d been anticipating turned out to be just soupy.

For even though the Boatwrights are portrayed as cultured women who read classic novels and play the cello, at heart, this is yet another standard-issue tale about Magical Negroes whose primary purpose is to help a white protagonist learn about the true meaning of life.

I get that our racist past means that until relatively recently, the black people most whites encountered were people who served them. Which is why we have so many stories like The Member of the Wedding, Caroline, or Change, To Kill a Mockingbird (in both versions) and now The Secret Life of Bees. Many of these are well-told stories by very talented and well-meaning writers. But I’m just tired of them.

Nottage, the only African-American among the core creators of the musical, attempts to shift the spotlight to the Boatwrights and Rosaleen but the gerrymandering is sometimes awkward. Too often when the sisters, nicely played by LaChanze, Eisa Davis and Anastacia McClesky, talk to one another, their conversations are mainly about Lily.

The music, rooted in the percussive rhythms and down-home melodies of spirituals, is rousing. And Birkenhead’s lyrics, which occasionally borrow from Gullah, the creole language once spoken by slaves and their descendants, can be affecting (click here to read more about how they put it together). But these bids for authenticity also seem to be trying too hard.

Meanwhile, Gold’s direction is even more misguided. Even though he has the services of the imaginative scenic designer Mimi Lien, Gold sets the action on a mostly bare stage and many scenes require actors to get down on their hands and knees to mop up liquids he's unnecessarily directed them to splash or dribble on the floor as part of ersatz rituals.

And when in doubt for what to do, Gold has his cast break into a Juba, the foot-stomping and body-slapping dance black slaves created when their white owners forbade them to use drums. That dance can make a powerful statement when used the right way (as it was in Choir Boy whose choreography was nominated for a Tony) but it can come off as caricature when it isn’t.

The actors try their best to make it all work. Their voices are splendid and the harmonies they create are stirring. But the characters they’re playing are thinly drawn and their actions hard to believe.

As she often does, Nottage tries to inject notes of optimism, even changing some significant plot points from the book to make for a more upbeat ending. But that also undercuts some of the drama that the show so badly needs.

Still, the success of the book and the movie—and, to be honest, the largely positive critical response to this show—prove that there’s an audience for this kind of racial comfort food. It’s just an audience that doesn’t include me.

Labels: The Secret Life of Bees