"This Ain't No Disco" Ain't Much Fun 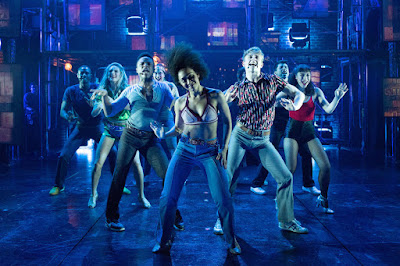 Maybe there were too many top chefs in the room when they were cooking up This Ain't No Disco, the rock musical that recently opened at the Atlantic Theater Company's Linda Gross Theater. Cause the show, which purports to tell the potentially juicy stories of a group of fictional and non-fictional people associated with the dance club Studio 54 at the height of its fame in the late '70s, has turned out to be a big bowl of mush.

Few shows started off with more advantages. The rock score is by Stephen Trask, who composed the foot-stomping music and witty lyrics for Hedwig and the Angry Inch; and Peter Yanowitz, the drummer for the Grammy Award-winning rock band The Wallflowers. These guys clearly know their way around rock music and some of This Ain't No Disco's tunes are catchy but the overall score lacks cohesion and there's no great dance anthem, which a show like this one obviously should have.

Similarly, I expected much from Rick Elice, the co-writer of the Tony-nominated book for Jersey Boys, who collaborated with Trask and Yanowitz on the book for this show. But their narrative totally fails to deliver. Its dialog, delivered in rhyming couplets, isn't nearly as clever as it wants to be.

The multiple storylines are convoluted and ultimately make no sense. A scene in which two coatroom staffers fantasize about the lives of the rich and famous who frequent the club is a perfect setup for exploring the obsession with celebrity culture that seems to be the show's underlying message but that plot line abruptly veers in another direction.

And the characters—be they the fictional gay hustler who enjoys 15 minutes of fame as a graffitti artist and the single mom who becomes a coked-up disco diva, or the real-life Steve Rubell who managed Studio 54 and club regular Andy Warhol who is coyly referred to only as The Artist—are so sketchy that it's hard to invest in what happens to any of them.

But most disappointing of all is the direction by Darko Tresnjak, whose pitch-perfect staging of A Gentleman's Guide to Love and Murder deservedly won him the Drama Desk, Outer Critics Circle and Tony Awards four years ago. Tresnjak says he had an unusually short period of time to work on this production (click here to read an interview with him) and more time was clearly needed because this is a lackluster re-creation of the flamboyantly colorful disco era.

The director does have scantily-clad male disco dancers gyrating around the stage but they seem sleazy rather than glamorous or the naughty fun that Studio 54 was famous for. And Tresnjak is even more at a loss when the action briefly shifts to the intentional grittiness of the downtown punk-rock haven the Mudd Club (click here to read more about it).

The attempts at cinematic staging are clunky. The choreography is flatfooted. There's a whiff of desperation as actors run around the stage and into the audience. The jungle-gym style set conveys little of the flavor of either dance club and does no favor to audience members sitting on the sides.

The costumes are OK. But the lighting and sound definitely are not. The diva was almost through her big second-act ballad before I could find where she was onstage, which is what good lighting is supposed to show me.

The Playbill says that the first-time sound designer is a master engineer who has mixed thousands of recordings for everyone from David Bowie to Vampire Weekend. But a show is different from a recording and it's often hard to understand what Disco's actors are saying, crucial in a show that is mostly sung through.

The diverse and largely young cast is energetic but uneven. There's a lot of mugging and Theo Stockman gnaws straight through the scenery as Rubell. However Will Connolly does manage to bring a droll restraint to his portrayal of The Artist (I'm guessing the Warhol estate denied the use of his name but couldn't do anything about the trademark white wig).

Faring best is Chilina Kennedy, who has spent the last three years appearing as Carole King in Beautiful and brings a sense of professionalism and some much needed humor to the role of a self-promoting publicist.

Steve Rubell, who died in 1989,  and his partner Ian Schrager, still alive and so not mentioned in the show, threw a final party at Studio 54 in 1980 and then went off to serve a year in jail for tax evasion, which is where this staged version of their tale ends.

The real Studio 54 venue went on to become one of the theaters owned by the Roundabout Theater Company. I've seen many great performances there since the company took up residence in 1998 and I'm looking forward to seeing Bobby Cannavale, Cherry Jones and Daniel Radcliffe there in The Lifespan of a Fact this fall and then in the spring the much anticipated revival of Kiss Me Kate with Will Chase and Kelli O'Hara.

I was living in San Francisco during disco's heyday and I only got past the old Studio 54's velvet rope once during a vacation home. I have to confess that I wasn't as impressed as I thought I would be (although I did get a small kick out of seeing Calvin Klein and Liza Minnelli) but even that was more entertaining than This Ain't No Disco, which, alas, simply ain't much fun.

Labels: This Ain't No Disco