"In the Body of the World" is an Ego Trip 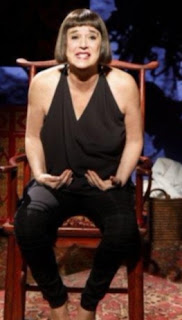 It's been 20 years since the dance critic Joan Acocella declared that she wouldn't critique a piece that the choreographer Bill T. Jones had centered on terminally ill people and his own diagnosis of AIDS. While acknowledging the pain and suffering of Jones' subjects and of the artist himself, Croce said she found the work "intolerably voyeuristic." She seemed churlish to me at the time but I got what she meant as I sat wondering what I would write about the Manhattan Theatre Club's production of In the Body of the World, the new solo show in which Eve Ensler recounts her battle with uterine cancer: I'm sorry that Ensler had to go through such a harrowing experience but I'm also sorry that her show dragged me through it.

And I'd been looking forward to the show because I'd been such a fan of The Vagina Monologues, Ensler's 1996 breakthrough show about women and their bodies that has now been performed all over the world and caused Valentine's Day to be rebranded in feminist circles as V-Day.

But I also wanted to see the new work because it had been touted as a show about Ensler's efforts to help women in the Congo struggling to recover from the systematic rape that has become a brutal weapon in that country's many civil wars. Those efforts are in In the Body of the World but the body that gets the most attention is Ensler's own.

Under Diane Paulus' indulgent direction (click here to read an interview with the director), Ensler recounts in excruciating detail the examinations and treatments she underwent, including the bruising insensitivity of some doctors, the shame of a bursting colostomy bag and the almost paralyzing fear of dying.

I'm happy that she seems to have gotten past all that. And I'm assuming it must be cathartic for her to relive these awful times in her life but isn't that what therapy is for?

Ensler is a witty woman and there are genuine moments of levity (when a doctor recommends radiating her vagina, she wryly reminds him who she is) but other moments are forced. The man next to me and I silently bonded when we both refused to participate when she insisted that audience members stand up and join her in a victory dance.

Yet what I resented most was Ensler's attempt to draw parallels between her experience and that of the Congolese women. I know that Ensler has worked diligently for disenfranchised women over the past two decades. So perhaps the metaphorical linkages between the personal and the political worked better in her 2013 memoir that shares a name with this show.

But for me, equating the ordeal of a privileged white woman battling cancer when surrounded by supportive friends and cared for with the best treatments the American medical establishment has to offer with the trauma of being a poor black woman raped, mutilated and later shunned by her community comes off as the kind of cultural imperialism that Ensler herself usually abhors.

Labels: In the Body of the World