Dethroning "Farinelli and the King" 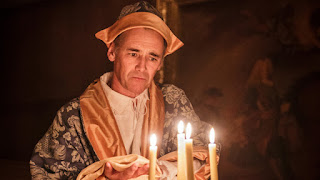 Is Mark Rylance the greatest actor of our time? Over the course of a three-decade career, he's won three Tonys, two Oliviers and an Oscar. Last year, the Queen knighted him for his service to the theater. And now, almost everyone seems to be cheering his performance as the bipolar 18th century Spanish monarch Philip V who finds his greatest solace in the singing of the titular opera singer in Farinelli and the King. Everyone that is except me.

Rylance has dazzled me before with his bravura performance in Jez Butterworth's epic Jerusalem (click here to read my review) and in the small show Nice Fish that he did two years ago at St. Ann's Warehouse (click here for my review of that). I've also liked him in movies like "Bridge of Spies" and TV series like "Wolf Hall." But this time out, Rylance relies too heavily on his bag of established tics (the eccentric line delivery, the deadpan stare) and on the tolerant affection of his audience.

Now I was charmed by Farinelli's opening scene in which the king displays his madness in a loopy conversation with a goldfish but I didn't buy Rylance's performance for one minute after that. Which meant I ended up not caring what happened to the king he was supposed to be bringing to life.

Part of the blame has to rest with the play itself, which was written by Claire van Kampen, who also happens to be Rylance's wife. In various interviews, van Kampen has talked about her delight in coming across the true tale of how Philip's queen brokered the therapeutic relationship between the king and the singer, a then-celebrated castrato who was mutilated before puberty to maintain the sweet high-pitched sound of his voice (click here to read more about the backstory).

But van Kampen's version of their story lacks tension or even heart. She makes a few faint attempts at the former, with the suggestion of a romantic connection between the queen and Farinelli (yes, it seems that castrati could have sex) but neither she nor director John Dove find a way to develop that storyline.

Nor do they dig into why Farinelli, who never again performed in public after singing for the king, would give up his career to become a courtier. And although they use the very smart conceit of having two actors play Farinelli, who in the play says he feels as though man and voice are separate entities, that too is left unexplored. The show is all tell and too little show.

Instead, van Kampen, a trained musician, focuses on creating opportunities for songs, primarily by Handel, to be sung throughout the performance. The result is kind of a high-class jukebox musical. And it comes with the same problems so many of them have: the narrative doesn't match up to the music.

The saving grace here is that the songs are sung by the countertenor Iestyn Davies. I'm nowhere near an expert on opera but even I could appreciate the beauty of Davies' falsetto voice (click here to read an interview with him and Sam Crane, the actor who plays the non-singing Farinelli).

And there were also other things to appreciate in Farinelli and The King. The production, which is scheduled to run at the Belasco Theatre through March 25, originated at Shakespeare's Globe in London and subscribes to that theater's dedication to using techniques from the Bard's time.

Most of the lighting, artfully designed by Paul Russell, is achieved by candle light (click here to read more about that). I got a particular kick out of watching stagehands, dressed in period garb, as they tended to the candles during the intermission. The sumptuously-painted backdrops are gorgeous, And the costumes by Jonathan Fensom and wigs by Campbell Young Associates delight the eye too.

But as beautiful as all of that is, that's not the primary reason I go to the theater. And I felt let down by the performances. They aren't bad. They're just blah. And I expect more from the greatest actor of our time.

Labels: Farinelli and the King