"Curvy Widow" Plays to its Demographic 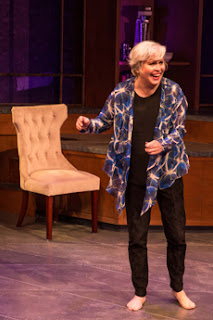 Women of a certain age (which usually means between 50 and 75) make up the majority of the theater's ticket buying audience. And Curvy Widow, the new musical that recently opened at the Westside Theatre, is made for them.

Now I don't want to oversell this. Curvy Widow is basically a vanity project that showcases its book writer Bobby Goldman's personal story of how she made a life for herself after the sudden death of her husband the playwright James Goldman, who wrote The Lion in Winter and the book for Follies and died in 1998 at the age of 71.

And yet, the show's strong sense of the you-go-older-girl message it wants to deliver and the forthright amiability with which it delivers it won me (a card-carrying member of the certain age set) over.

Goldman was 55 when she lost her partner of three decades. Like many women of her age and class (money is not a problem for our heroine and the play is rife with references to big-dollar places like Hermès and Per Se) she had built her life around her husband's needs and desires. Once he was gone, she had to figure out how to satisfy her own needs and desires.

The onstage Bobby jettisons her East Side apartment for a downtown loft and trades in her Chanel suits for Eileen Fisher slouchy wear. But most of the show—and nearly all of its jokes—centers on Bobby's efforts to revive her sex life, ranging from the vagaries of online dating in her 50s (the show's title is her dating sites screen name) to finding a remedy for the vaginal dryness that often plagues women after menopause.

All of it is set to chirpy but forgettable music by Drew Brody, whose most prominent earlier credit is the interstitial score for Nick Kroll and John Mulaney's Oh, Hello. And, with the exception of the sleek and versatile set by Rob Bissinger, the rest of the production has an amateurish feel as well.

It's easy to imagine that most of the notes director Peter Flynn gave his cast must have been along the lines of "play it bigger." Having each of the six ensemble members play multiple roles doesn't help either. At one point I wondered why Bobby was dating her therapist until I realized that the actor was now playing another character.

What saved the evening for me was the game performance by stage vet Nancy Opel. She looks age-appropriately great, is in fine voice and doesn't take herself or the material too seriously (click here to see her perform a number).

And yet, there is an underlying warmth to Opel's performance that clearly respects the fact that lots of women—widows, divorcées, the never-marrieds—are going through some variation of Bobby's experience.

Women in the audience at our performance hooted out their support for her as Bobby endured one bad date after another. And, judging from the conversation in the lady's room after the show, they seemed content with how she ends up as well.

If you're looking for an intellectually stimulating evening, then Curvy Widow won't be for you. But for women born near the middle of the last century, it could be a fun evening to share with a group of longtime gal friends.

Although you don't have to be an old broad to enjoy it; from the way they laughed and applauded, two young guys sitting a few rows away from my theatergoing buddy Bill and me seemed to be having a good time too.