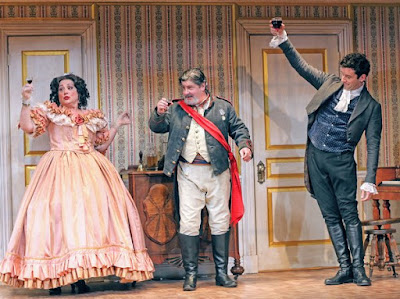 The Red Bull Theater Company has a gift for silliness. Its production of Richard Brinsley Sheridan's 18th century classic The School for Scandal was one of the best evenings I had in the theater last year (click here to read my review). And for the past four weeks Red Bull's production of Nikolai Gogol's 19th century satire The Government Inspector has been delighting audiences just as much at The Duke on 42nd Street.

Gogol wrote his play to protest—and poke fun at—the rampant political corruption in Imperial Russia. He placed the action in a provincial town where the locals have recently learned that an undercover official has been dispatched from the capital to secretly investigate wrongdoings in their region.

When a stranger takes up residence at the local inn, everyone assumes he's the dreaded inspector. So all the local muckety-mucks—the crooked mayor and his social-climbing wife, profiteering merchants and magistrates, a pair of dimwitted landowners—try to curry his favor with bribes and other offerings.

The problem, of course, is that the stranger is not the inspector but a feckless dandy from the city named Hlestakov, who is mystified by all the attention he suddenly receives but keeps demanding more and more of it.

The playwright Jeffrey Hatcher has crafted an adaptation that's a bit too contemporary for my taste but I totally appreciate how director Jesse Berger has shamelessly plagiarized the playbooks of comic geniuses ranging from the Marx Brothers to Mel Brooks to squeeze every single laugh out of it.

He's aided by a brilliant cast of clowns that includes Michael McGrath as the mayor, Mary Testa as his wife and the invaluable Arnie Burton as Hlestakov's smarter-than-his-master servant and a busy-body mailman (most of the supporting cast doubles).

But Berger and we in the audience are most indebted to the always-appealing Michael Urie, who is as adept at physical comedy as he is with a one-liner in the role of Hlestakov.

The other 10 cast members, all masters of comedic timing, are funny as hell too. Even Tilly Grimes' costumes deserve—and gets—laughs. My friend Ellie, a former actress, fell over laughing several times. I tend to be harder to please when it comes to farce but even I couldn't restrain my giggles.

Yet, as the last line of the play makes clear, Gogol had more than just laughter in mind when he wrote The Government Inspector and his message is just as relevant today as it was when he wrote it. The Red Bull's run of ends June 24. Hurry out and see it.