"Natasha, Pierre and the Great Comet of 1812" Shines Brightly But Illuminates Little 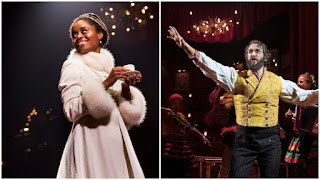 The Oxford Dictionary declared "post-truth" to be 2016's word of the year but in the theater world, I think a better choice would have been the word "immersive."

Everywhere you looked, folks seemed to be adding some kind of interactive element to their production, be it something as simple as pumping the aroma of pies into the theater (and selling them during intermission) as Broadway's Waitress does or as intricate as staging a James Joyce novella in an actual Fifth Avenue mansion and having audience members join the actors at a dinner inspired by the one in the story as the Irish Rep did with The Dead 1904, which ends a month-long run at The American Irish Historical Society tonight.

But nowhere is the trend more celebrated than it is in Natasha, Pierre & the Great Comet of 1812, Dave Malloy's musical adaptation of a selection from Leo Tolstoy's "War and Peace." It has turned all of the Imperial Theatre into its playing space, with seats onstage as well as in the traditional orchestra area, actors scampering up and down the aisles and along specially built catwalks and vendors peddling vodka and giving away aromatic pierogies to some lucky audience members including my theatergoing buddy Bill but not, alas, me.

The production mimics, albeit in a much more lavish way, the experiences of the earlier off-Broadway versions of the show done at Ars Nova, in a tent in the Meatpacking District and in another tent next door to its current home. So if you saw and liked The Great Comet in any of those incarnations, you'll no doubt like it here.

I felt so-so about the show when Bill and I saw it downtown and I still feel that way (click here to read my original review). The Great Comet is an ingratiating show but, despite its source material, it's not really a substantive one.

Malloy and his inventive director Rachel Chavkin (this production's true MVP) throw a great party but they fail to dramatize the complex inner lives of Tolstoy's lovelorn aristocrats or to make it clear why they even wanted to retell Tolstoy. Instead, they've just put a synopsis of the plot and a family tree in the Playbill. And I saw lots of people intensely consulting both during the intermission.

Still, the new leads who have joined the Broadway production do much with the little they've been given. The pop singer Josh Groban, almost unrecognizable in a fat suit, shines as the clumsy and cuckolded Pierre.

Groban has a marvelous tenor voice but he also started off as an actor and he uses both talents to evoke something of the awkward grace and nobility that have endeared the character to generations of readers (click here to read about how he created his performance).

Although Groban is clearly the show's marquee name, the final curtain call bow is given to newcomer Denée Benton (click here for an interview with her) who now plays the naive Natasha, the role that was originated off-Broadway by Phillipa Soo, who went on to play Elizabeth Schuyler in Hamilton and is scheduled to star as the title character in the upcoming musical Amélie.

It is the tale of Natasha's entry into Russian society and the three very different men who vie for her affections that provides the storyline for The Great Comet and praise should be given to the creative team for casting first an Asian-American woman and, now, an African-African woman in the role.

Benton is lovely, looks wonderful in the Cinderella-like gowns Paloma Young has created and has a delicate soprano that is just right for the character. But its her simple presence that may be most significant. 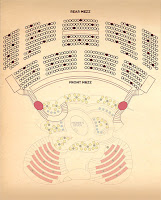 Set designer Mimi Lien has placed tables around the lip of the stage (click here to read more about her concept) and I saw a little black girl of about eight or nine and her mom sitting at one of them. The little girl, whose dark chocolate skin tone exactly matched Benton's, couldn't take her eyes off the actress and her enchantment was exactly the kind of immersive experience the theater has always offered. And which has always been magic enough for me.

Labels: Natasha, Pierre and The Great Comet of 1812