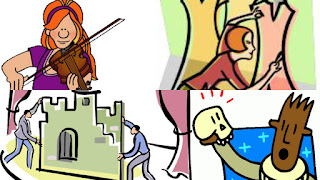 Even though the theater world slows down in summer, the time between Memorial Day and Labor Day is my favorite time of the year. And this year, I kicked back and was even lazier than usual (although when I did venture out, I saw some delightful stuff, including Indecent, Hadestown, Small Mouth Sounds, Men on Boats). But Monday is Labor Day, which means the pace of things is about to pick back up and the fall theater season will soon be swinging into full gear.

But before it does, I want to take a little time out for my annual salute to some of the people who work hard to make the theater that folks like you and me love. And this time I want to salute some people who seldom get any recognition: the seamstresses, wigmakers, set builders, pit musicians and legions of others who make up the unglamorous but vital ranks of what you might call Blue Collar Broadway.

In fact, I recently read a book of that exact same title by Timothy R. White, a professor who specializes in urban history. He notes that nearly all of Broadway used to be a blue-collar world with few of the people who worked in the business getting rich—or expecting to. The payoff was being part of the exciting world that centered around the warren of midtown streets housing not only theaters but the shops that supplied all their needs.

Theaters across the country and the actors who performed in them got their sets and costumes from these New York shops that, in the process, helped to create a vibrant industry. Piggybacking onto the growing labor movement in the late 1890s, these craftsmen also organized and turned their jobs into true professions and the productions they serviced into first-class entertainments.

White’s book recounts how the scene painters were among the first to organize as the International Brotherhood of Painters, Decorators and Paperhangers and how they and their brethren secured safe conditions and good-paying jobs for their members.

But the book also chronicles how the unions lost power as the midtown shops were pushed out to make way for big building complexes like Rockefeller Center and how the regional theaters that sprang up after World War II created their own (largely non-unionized) scene and costume shops.

But one of the unions that has retained a strong voice is the Actors' Equity Association. It didn't get started until 1913 but it's remained in the vanguard of progressive activities ever since, marching for Civil Rights and raising money to fight the AIDS crisis.

This past week, under the direction of its young and dynamic president Kate Shindle, a former Miss America, it issued its first-ever endorsement in a presidential campaign and gave its support to Hillary Clinton.

But the main activity for all the unions, from the American Federation of Musicians, Local 802 to the Theatrical Wardrobe Union Local 764, has been to support the people who labor hard to make the magic we see onstage and on this Labor Day, I hope you'll join me in expressing our solidarity with them—and our gratitude for all that they do.