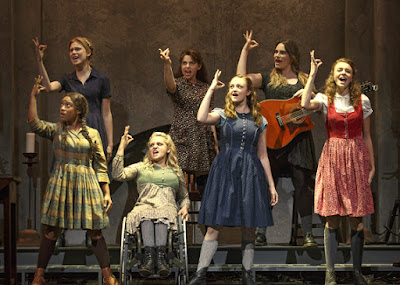 "I dare you to knock a show starring deaf people and a girl in a wheelchair," my husband K said when I got home from the Deaf West Theatre's revival of Spring Awakening that is playing a limited engagement at the Brooks Atkinson Theatre through Jan. 24.

Well, I don't have the cojones to do that but I do have to say that as great as it is to see those folks onstage (and all the deaf people in the audience too) I wasn't really moved by the production itself.

And that surprises me because I was totally smitten by the original production that opened in 2006 and won eight Tonys, including Best Musical, the year before I started writing B&Me. I was such a fan of Duncan Sheik and Steven Sater's pop-rock score that I bought the cast album and had it on repeat-play for months.

I also was won over by the perspicacity of the 2006 production's casting folks who gave the nod to the then-fledgling talents of Jonathan Groff, Lea Michele, John Gallagher Jr., Gideon Glick and Krysta Rodriguez, who graduates from an ensemble member in that earlier production to an awards-worthy portrayal of the local bad girl Ilse in the current one.

So even though it seemed a bit too soon for a Broadway revival (click here to read about the producer's decision to bring it back), I was intrigued by the new production’s concept of highlighting the miscommunication between the generations by making many of the youngsters deaf and literally unable to speak to their parents or hear them.

But when I actually saw the show, I found its conceit of having deaf actors sign their dialogue and song lyrics while hearing actors simultaneously speak and sing the same lines to be distracting and to lessen, instead of heighten, the emotion.

Yet, I still admire the skill that, under the taut direction of Michael Arden, went into syncing the two languages. And I also appreciate how Spencer Liff, building on Bill T. Jones' stylized movements for the original production, finds imaginative ways to incorporate American Sign Language into his choreography (click here for a story about how they put it all together).

Those efforts are helped by the casting of the TV actress Camryn Manheim, who learned ASL in college (click here for a Q&A with her) and the veteran deaf actors Marlee Matlin, who won an Oscar for her work in "Children of a Lesser God" (click here to read an interview with her), and Russell Harvard, the heart and soul of the terrific 2012 off-Broadway show Tribes (click here for my review of it), all three making their Broadway debuts.

And, of course, it's always a pleasure to see—and hear the dulcet voice of—Patrick Page, who shares the adult male roles with Harvard. Several of the young deaf actors, including the lovely Sandra Mae Frank, as the naive Wendla, and Daniel N. Durant as the tormented Moritz, are very good too.

But my biggest kudos go to Austin P. McKenzie, a charismatic hearing actor with the pretty-boy looks of the young Warren Beatty, who sings wonderfully, does his own signing and, perhaps because he's able to control the role, allowed me to invest a little in the main character of Melchior who most successfully defies the adults.

And then there's that girl in the wheelchair. Her isn't technically a starring role. Ali Stroker, who was paralyzed in a car accident at two and is the first wheelchair bound actor to appear in a Broadway show (click here to read more about her) is a member of the ensemble but the exuberant abandon with which she performs makes her a standout. And I dare anybody to knock that.

I'm glad to finally see somebody else who feels this way. When I went to a late preview, the audience - a bunch of theater kids - was going nuts. I kept asking myself, What are they cheering for? I just didn't get it. The play did nothing for me. At the time, I thought I had seen it too soon after the incredible Hamilton. Any musical by comparison would look drab. But this one was really drab: a bunch of teenagers in shorts running around obsessed by sex while their uptight parents try to make it all disappear? That's supposed to be a novel idea?