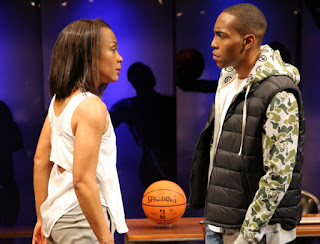 Strong, successful women don’t fare well in most contemporary plays. As I've complained before, something always seems to come along to cut them down to size. And so at the risk of violating my usual no-spoilers policy, I have to say that it was refreshing to see the dynamic title character still standing at the end of King Liz, the new play by Fernanda Coppel that is playing at Second Stage Theatre’s McGinn/Cazale Theatre through Aug. 15.

Black, brainy and ballsy, the titular Liz Rico grew up in the projects in Brooklyn, got a scholarship to an Ivy League college and then over the next 20 years worked her way up from a secretary to the top agent in a testosterone-heavy sports agency that represents the biggest stars in the NBA and NFL.

As the play opens, the head of the firm is about to retire and the leading contenders to succeed him are the hard-charging Liz and a white guy with whom the board members enjoy playing golf. But Liz believes that she can win the top spot if she can sign Freddie Luna, a teenage basketball phenom (charismatically played by Jeremie Harris) who’s been blessed with Kobe Bryant-level talent but burdened with a questionable past and an uncontrollable temper.

Most critics have looked at King Liz primarily as a show about the sports world and there is plenty of jock talk. But Coppel clearly has other things on her mind as well. Perhaps too many.

Like many young playwrights afraid that they may not get another chance to have their say, she crams all of her concerns—the stereotyping of young black men, sexism in the corporate world, the celebrity culture and the price of success, among others—into her two-hour play. Luckily, Coppel’s writing is brisk and funny. And director Lisa Peterson has given her play a slick production.

But it’s the compelling character of Liz that makes this show. And Karen Pittman, power dressed by costume designer Jessica Pabst in form-fitting outfits that cling to her Pilates-toned frame, gives a fierce performance, strutting across the stage in stiletto heels, spitting out one-liners with the raw bravado of a gangsta rapper (click here to read a Q&A with her).

Although she is a little over-the-top in the opening scenes, Pittman is remarkable in the second act as, with a change in the inflection of her voice or just a look in her eye, she reveals the deeper emotions behind the ferocious mask that Liz shows to the world. This Liz is aware of the tough choices she’s made to succeed but unlike her peers in other plays, she refuses to make excuses for them or to let them get the best of her.

That makes King Liz not only an entertaining show but a substantive one.  And it could have been even more so if given a few more drafts. Even Coppel seems to think so. In a fascinating interview for the Maxamoo podcast (click here to listen to it), she says that Second Stage, eager to get in on the current conversations about race, skipped some of the usual development process and moved the production up on its schedule.

It’s an understandable decision but also an unfortunate one because with a little more time this promising contender could have been a real winner.