"Doctor Faustus" Commits Too Many Sins 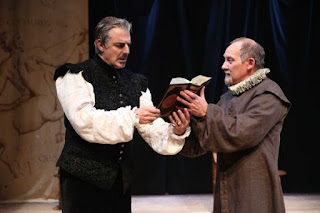 Christopher Marlowe’s Doctor Faustus was “The Exorcist” of its day. Sixteenth century theatergoers were so horrified by Marlowe’s retelling of the tragic story of the ambitious scholar who sells his soul to the Devil that they reportedly passed out, vomited and even fled the theater in fear.

Marlowe’s plays get produced far less often than those of his contemporary Shakespeare but both my theatergoing buddy Bill and I had been so taken with the thrilling version of his tragedy Tamburlaine that Theatre for a New Audience put on last fall (click here for my review) that we were really curious to see what CSC would do with this one.

Also as fans (me former, Bill current) of the CBS drama “The Good Wife,” we were also up for seeing two of its stars Chris Noth and Zach Grenier as Faustus and Mephistopheles, the demon who acts as an intermediary between the doctor and the Devil.

Alas, they, in varying degrees, also disappointed. Grenier does manage to give Mephistopheles an appropriate—if one note—melancholy. But Noth seems cowed by the demands of his role.

Noth captures neither the exhilaration Faustus feels as his deal with the Devil makes him all-powerful, even able to summon at whim Alexander the Great and Helen of Troy from the dead, nor the anguish Faustus experiences as he realizes that he has made a terrible bargain that will condemn him to eternal damnation.

Both Noth and Grenier are stage vets whom I've seen do fine work in the past (click here to read an interview with Noth) and so I’m laying most of the blame for this lackluster production on Andrei Belgrader, who not only directed it but, along with David Bridel, did the adaptation.

Belgrader apparently felt that modern audiences are less into lofty musings about Heaven and Hell than those of five centuries ago and so he’s tried to hook them with the opiate of today’s young masses: comedy, the lower and the more ribald the better.

Consequently he and Bridel have shifted the focus from Faustus and Mephistopheles to the doctor’s servant Robin and a pal, here pointedly called Dick, who steal a necromancy text from Faustus and haplessly attempt to conjure up the life they most desire.

Some modern day scholars have argued that the original comic scenes are so out of keeping with the rest of the play that they must have been added after Marlowe's premature death from a stabbing at just 29. But others say that he wrote them himself as a way to alleviate some of the tension in his demonic tragedy.

Either way, Belgrader doubles down on them. Lucas Caleb Rooney and Ken Cheeseman, the actors who play these fools, are amusing at first (they’d be great as Twelfth Night’s comic duo Toby Belch and Andrew Aguecheek) but the shtick here gets old fast. They also pull some audience members into their antics; I put on my evil face so they wouldn’t choose me.

But I wasn’t all that taken with the approach to the Faustus storyline either. I was particularly turned off by a scene in which one of the female actors was required to appear nude. And the parade of the Seven Deadly Sins that so shocked Elizabethan audiences just seemed tedious. Plus, I only counted six sins.

In fact, there was a cut-rate air to the entire production, which Bill joked must have cost a nickel. There was practically no scenery, with the exception of a few pieces of furniture that a stagehand literally dragged on and off.

Similarly, Mephistopheles is supposed to make his first appearance as a monstrous creature but the one that shows up here looks like it was borrowed from a junior high school production.

I’m going to resist the temptation to end this review with a pun on the words hell or sin. But feel free to invent your own.

I questioned the number of sin representations, too. Then I remembered that first sin was Pride, one of the uncomfortable (and ineffective) audience-participation schtick attempts. It failed miserably when I saw it.

Ah, I remember that now. It obviously failed for me too.