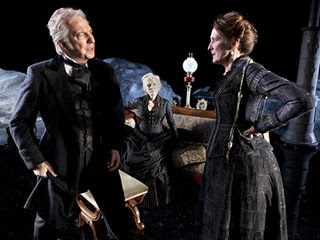 Everyone sitting around me in BAM’s Harvey Theater this past Saturday seemed to be a diehard theatergoer.  The woman next to me was boasting about how she already had tickets to see Company at the New York Philharmonic in April with Neil Patrick Harris as the unhappy bachelor Bobby and Patti LuPone as his friend Joanne who sings about the also unhappy ladies who lunch. The two couples behind me were debating what was currently playing at the small Duke Theater on 42nd Street (the answer turned out to be Nearly Lear—a one-woman version of Shakespeare’s tragedy that closed Sunday).
I wasn’t surprised by the conversations because, after all, we were there to see The Abbey Theatre’s production of John Gabriel Borkman, one of Henrik Ibsen's least known and least performed plays. It's about a bank manager who has embezzled the funds of his clients and, in the doing, destroyed the lives of his family.

The obvious comparisons to the Bernie Madoff scandal gIve the play a nice frisson of contemporary relevance. But what had really brought us—or at least me—out to see the play was its cast: Alan Rickman, Lindsay Duncan and Fiona Shaw. Those may not be marquee names for people who buy their tickets on the basis of movie star glamour but they’re stellar enough to flutter the heart of any true theater lover.
Duncan rightly won Tonys for her performances in the 2002 revival of Private Lives and the original 1987 production of Les Liaisons Dangereuses; Rickman was her co-star and a worthy Tony nominee in both. Shaw, meanwhile, was nominated for her powerhouse performance in the title role of the 2002 Broadway revival of Medea. And all three have shelves loaded with awards for their work in London.  Alas, this time out, they seem miscast.
Particularly Rickman in the title role. The play opens after Borkman has served five years in prison and three in self-imposed exile on the top floor of his home, where is he scheming for a comeback. But Rickman’s interpretation of the character is so phlegmatic that it’s hard to believe his Borkman can summon up the energy to get downstairs, less than to get back to the top (click here to read an interview with him).
Shaw displays more energy—maybe too much—as  Borkman’s estranged wife Gunhild who is desperate to restore the family honor. By default, Duncan probably comes off best as Gunhild’s rich twin sister Ella, who also happens to be Borkman’s true love and is seeking redemption of her own (click here to read an interview with her).
All three main characters want to win the allegiance of the Borkmans’ son Erhart.  But the young man has plans of his own, and the affection of a sassy older widow who's ready to help him achieve them. That should provide enough tension to hold an audience’s attention and Frank McGuinness’s translation makes it all accessible without being overly contemporary. But James Macdonald’s direction is as listless as Rickman’s performance. Misguided too.  Audience members tittered several times at moments in the play that I don’t think Ibsen meant to be funny.
And while it may not have been Macdonald’s idea to decorate the stage with giant mounds of snow, he didn’t stop set designer Tom Pye from doing it. They look like chillier cousins of the boulders in the ill-conceived 2009 revival of Desire Under the Elms.  I get that the snow drifts are supposed to symbolize the frozen relationships between the characters but I like my metaphors to be a little more elegantly presented than that.
Add Jean Kalman’s tenebrous lighting and Ian Dickinson’s attenuated sound design and it was a challenge to stay awake, despite the misplaced audience giggles.
I roused myself at the end and made my way to the Harvey’s very nice ladies’ room (rows and rows of stalls, forestalling the usual ridiculously long wait) before making the trek back to Manhattan.  “Did you like it,” asked a woman as I shrugged into my coat.  “No,” I said.  Which pretty much ended that conversation.