"An Error of the Moon" is Full of Blunders 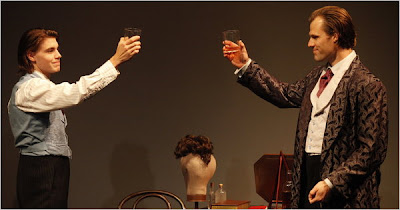 Retirement has been reinvented.  People no longer move to Florida or Arizona and just sit there and wait for their final exit.  Instead they take up high energy hobbies like mountain climbing and skydiving. Or they do high impact volunteer work for groups like Habitat for Humanity and the PEACE Plan.  Or, like Luigi Creatore, they start second careers.

Creatore, who turns 90 this year, used to be a record producer who worked with Sam Cooke, Sarah Vaughan and Elvis Presley and wrote the lyrics to the songs “The Lion Sleeps Tonight” and “Can’t Help Falling in Love.” Now, he writes plays and, through a company he set up called Theatre 21, backs productions for them.  His first venture, Flamingo Court,  a comedy about a retirement community, had two brief runs at New World Stages in 2008 and 2009.  Last week, he opened An Error of the Moon, a play about the actor brothers Edwin and John Wilkes Booth, in the Beckett Theatre at Theatre Row.
Not up for old people jokes, I skipped Flamingo Court but, a sucker for Civil War-era stories and backstage dramas, I went to see An Error of the Moon. The royalty checks from Creatore’s earlier gigs are apparently still rolling in and he and his director Kim Weild have staged a relatively lavish production.  Alixandra Gage Englund’s costumes are sumptuous and Steven Capone’s expressionistic set is artful. Creatore also sprang for an elaborately-staged fencing duel even though it seems too large for the Beckett’s small stage; moody, albeit distractingly pretentious, video projections; and a video trailer that you can see by clicking here.
Playing loose with history, An Error of the Moon opens in what seems to be a purgatory in which the uneasy spirit of Edwin Booth looks back on his successful career and ill-fated relationships with his first wife Mary and his younger brother Johnny who, of course, would become best known for being Abraham Lincoln’s assassin. The play borrows its title from a line in Othello and Creatore tries to graft Shakespeare’s themes of jealousy and madness onto his work. It’s an interesting conceit but he lacks the ability to pull it off.  Some scenes in the 85-minute play are confusing;  others unintentionally laughable.
I’ve seen worse plays but they were, at least partially, salvaged by good acting.  But An Error of the Moon falls short there too. The four-member cast hams it up with the kind of melodramatic, 19th century style acting that, ironically, Edwin Booth, the greatest American actor of his day, helped to banish. The actors look right for their parts, particularly the lovely Margaret Copeland, who plays Mary.  But only Brian Wallace, who appears in all the smaller supporting roles, does truly convincing work. I blame Weild's direction for most of the acting missteps.  But Erik Hefer, who plays Edwin, has to bear the weight for his own overly flamboyant bow at the curtain call.
This is the second time that Creatore has wrestled with the Booth story.  An earlier incarnation of this play called The Man Who Shot Lincoln played at the Astor Place Theatre back in 1988, before that theater became the seemingly permanent home for The Blue Man Group.  That version lasted just 24 performances. The current one is scheduled to run until Oct. 10.  If you're one of those now rare retirees who's trying to fill time, all tickets are a fixed-income friendly $50.

Labels: An Error of the Moon