"Trust" is Amusing But Ultimately Unreliable 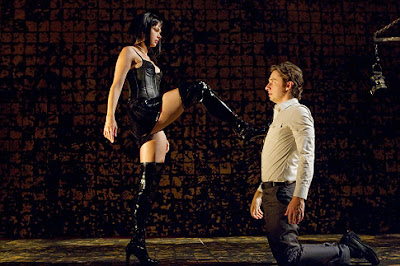 So many people were crowded outside Second Stage Theatre when I arrived to see Trust, the new comedy that opened there last week, that I thought for a second a bomb threat might have forced an emergency evacuation. Instead, I discovered a long queue of stand-bys apparently desperate to see Zach Braff, the star of the recently-departed sitcom “Scrubs”, who is appearing in the play along with Broadway vets Sutton Foster, Bobby Cannavale and Ari Graynor.

A good number of Braff’s followers seemed to have made it inside too because the audience, which the night my theatergoing buddy Bill and I saw Trust included Foster’s brother Hunter and his actress wife Jennifer Cody, seemed younger and hipper-dressed than the folks I usually see at Broadway or even off-Broadway shows. And they were exuberant with their support—laughingly raucously at all the lewd jokes, nodding knowingly (at least the folks in front of me) at the more philosophical turns.
I was amused too. Even if I can’t say the play is really good.  Playwright Paul Weitz made his bones in the movies as the director and or writer of such films as “American Pie” (the very best of the gross-out teen comedies) “In Good Company” and “About a Boy” but a big piece of his heart is clearly in the theater and he’s had four plays produced in New York in the last six years.  I haven’t seen the others but Weitz, who is 45, knows his way around a laugh line and he’s clearly devoted to chronicling the angst of his generation (or at least the white and wealthy part of it).
Trust centers around two thirtysomething couples: a dotcom millionaire and his depressed artist wife and a dominatrix and her thuggish ne'-do-well boyfriend.  The theme is power. As a character in the play says “everyone wants to be dominated.”  I don't know if I buy that but Trust sets out to show how that dynamic plays out between this troubled foursome.
Both the cast and crew are marvelously game. Braff may come from TV but he has natural stage chops and mines all the ambivalence of a geek who has brained his way into wealth and success and now isn’t sure what to do with them.  Graynor, a longtime favorite of Bill’s, skillfully limns the passive-aggressive languor of the millionaire’s unhappy wife.  Cannavale, whom I saw a few days later toting groceries home on the Upper West Side, has played the swaggeringly sexy brute before but no one does it better.  And Foster, beloved by musicals fans for her portrayal of feisty ingénues, is surprisingly good as the conflicted dominatrix (click here to read a New York Post interview about her decision to take the role).
Alexander Dodge creates smart and believable sets and Emilio Sosa’s costumes are just as witty. Peter DuBois’s sure-handed direction ties it altogether, creating a template for 21st century sex comedy, a genre that Second Stage, which also produced the similarly-themed Becky Shaw last season, seems to enjoy promoting. It’s hard to imagine a better cast or a better production. And yet something is missing.
And it's not just the titular "trust" in one another or in themselves that the characters all lack. I hate to sound like a scold.  Or an ingrate. Weitz has some intriguing ideas here but another revise or two might have honed them into a work of significance instead of the amusing trifle that Trust is.
It’s great that someone like Weitz, who has and can earn pocketfuls of money in Hollywood, even deigns to write plays but as long as theater is just a sideline (Weitz is the executive producer of the new Fox series “Lone Star” and the director of the upcoming movie “Little Fockers”)  then the resulting work is unlikely to be trustworthy, no matter how much his fans mob the box office.