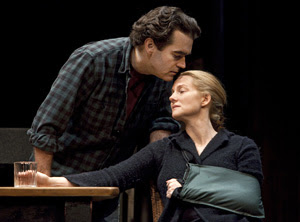 I always feel as though I want to move into the sets at Manhattan Theatre Club productions.  And I totally felt that way about the funky Brooklyn loft that John Lee Beatty has designed for Time Stands Still, Donald Margulies' thought-provoking drama about two war-ravaged journalists.

But I don’t at all envy the lives of the play’s characters.  I tried working as a journalist in a war zone during the mid-80s and it didn’t work for me.  Too scary. Too lonely. Too emotionally draining. The folks who excel at that work are a rare and complex breed and they make fine subjects in this play about the costs of constantly coming face-to-face with the world’s horrors.

The play opens when Sarah, a celebrated war photographer, has returned home after being badly wounded in a car bombing in Iraq. Her partner Jamie, a print journalist, had left a few weeks before bearing his own wounds. The plot centers around their attempts to recuperate and rebuild their lives. The injuries they’ve suffered seem obvious at first but as the play progresses, deeper damage is revealed.

People with first-hand knowledge about a subject can be picky when the world they know is portrayed on stage or on screen (my musician husband K is always rolling his eyes at fictional portrayals of musicians) and so, after having spent my career in the news business, I was prepared to find fault with the play’s depiction of journalists and the work we do. But what I saw rang true.

Margulies, who won the Pulitzer Prize for Dinner With Friends about a couple trying to hold on to their marriage in the wake of their best friends’ divorce, obviously knows how to do relationship drama.  But here he also pulls off the trick of making what is essentially an ideas play (what responsibility do journalists have to the subjects they cover? how voyeuristic is watching the suffering of others?) into an affective personal story.

He is also well served by his frequent collaborator director Daniel Sullivan, who establishes just the right tone of unfussy authenticity.  And the acting is so fine that both K and I felt as though we were peeping toms, peering through a window at real people.

One of the joys of seeing lots of plays over the years is the chance to see good actors take on different roles. Laura Linney seemed miscast the last time I saw her as the sly La Marquise de Merteuil in Les Liaisons Dangereuses but she’s magnificent here as a woman addicted to the adrenalin rush of being on the frontlines.  And so is Brian D’Arcy James, who last appeared under layers of green latex as Shrek but now brings tender humanity to the role of a man who has learned the hard way how to value the quotidian.

Rounding out the cast and every bit as good are Eric Bogosian as the couple’s best friend and editor and Alicia Silverstone as the younger woman in his life. Bogosian, still best known as the raging shock jock in his Talk Radio, is surprisingly sweet and nobody plays smart-dumb better than Silverstone.

This is the kind of play you want your friends to see so that you can debate it with them. So consider yourself told.  And hurry because it’s scheduled to close on March 21.


Update:  due to appropriately popular demand, the run has been extended to March 27.