"Next to Normal" is Next to Great 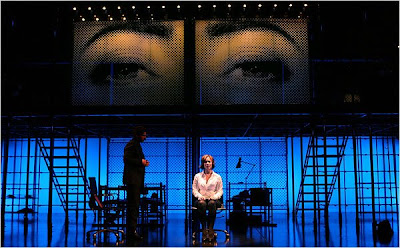 Springtime in New York is also class trip time. High school seniors from all over the country crowd (or, depending on how desperately you need to get somewhere when you find yourself walking behind them, clog) midtown streets. At some point most of them end up at a Broadway show. Still, I was a little taken aback when I got to the Booth Theatre a few days ago and saw a group of them waiting to go inside. For the Booth is now home to Next to Normal, the new musical about a middle-aged woman who has a bipolar disorder.

To be honest, I’d had my own reservations about seeing the show. I thought it would be depressing. So did my husband K, who opted to stay home, saying “I can depress myself right here.” As it turns out, K and I were wrong about Next to Normal. It is a heartbreaking show but it’s an uplifting one too, particularly if you care, as I do, about the future of the American musical. I was wrong about the kids too. Judging by the youthful-sounding cheers emanating from the balcony at the curtain call, they loved it.

The music is probably a large part of what appealed to them. Tom Kitt’s pop-rock score would be right at home on an Emo radio channel. And Brian Yorkey’s profanity-spiked lyrics are lingua franca for kids raised on potty-mouthed shows like “South Park.” But they work as Broadway songs too, advancing the story and revealing the inner lives of its characters (click here to hear excerpts and a Playbill interview with Kitt and Yorkey).

Or they do if you’re open to thinking of Broadway music as more than just one kind of sound. I love classic show tunes as much as any theater geek but I also came of age during the heyday of introspective singer-songwriters like Laura Nyro, James Taylor, Joni Mitchell, and Graham Nash and although I wish Yorkey’s lyrics had been less predictable (I figured out most of the rhymes before the actors could sing them) this music speaks to my soul.

Yorkey also wrote the book and its story—an original, not based on a movie, a book or a videogame—is even more audacious than the music. It examines how a mother’s mental illness infects her entire family. There are suicide attempts and death, there is prescription drug abuse and electric shock therapy. But Yorkey is smart enough to know there can be humor in even the most dire situations and he leavens the show’s many dark moments with a genuine affection for his characters and even a few glimmers of optimism.

But there’s plenty smart about this show. The actors, lead by Alice Ripley who gives a fearless performance as the mom, are perfectly cast. J. Robert Spencer and Jennifer Damiano are particularly good as the compassionate husband and confused daughter. But I have a special fondness for Adam Chandler-Berat who plays the daughter’s stoner-boyfriend with a sweetly geeky devotion that I haven’t seen since John Cusack’s underachiever Lloyd Dobler tried to woo the class valedictorian with a boom box serenade in the classic 1989 romantic movie “Say Anything.”

My only concern is whether their voices will hold out in what is almost a sung-through show, with more than a few of the songs calling for full-strength, power-ballad volume. The Playbill doesn’t list the songs but according to IBDB, there are 36 of them, including several reprises which helped wedge songs such as the love duet “Perfect for You” into my mind and makes me want to hear all of them again.

The creative team is in tune too. Mark Wendland’s set, an abstract, three-tiered jungle gym, doubles deftly as the family’s home and the inner recesses of the mom’s fractured mind. While the lighting by Kevin Adams brilliantly captures all the subtleties of the characters' emotions. And director Michael Grief keeps it all in harmony.

Kudos are also due the producers who stuck with the show through a winter 2008 run at Second Stage that got mixed reviews and a retooling in Washington later in the year. I didn’t see either of those but folks who did say this version is sharper and more emotional. If the creative team had worked a little more on the ending, they would have a truly great show instead of just a really good one. Even as is, Next to Normal may give Billy Elliot a run for the Tony gold on June 7.

Still Next to Normal isn’t for everyone. “It’s not incredible but it’s good. It’s a different kind of show,” the woman sitting behind me commented during the intermission. She, her mother and sister spent the rest of the break listing musicals they would have preferred seeing: Oklahoma!, South Pacific, West Side Story, A Chorus Line.

Of course, each of those shows was innovative in its time. Now, as part of a burgeoning trend that includes Spring Awakening, Passing Strange, and In the Heights, Next to Normal could help ensure that young people like those high school kids in the balcony think of Broadway as a living artform and not just as a museum dedicated to the memories of one.

Labels: Billy Elliot, In the Heights, Next to Normal, Passing Strange, Spring Awakening

I'm a bit concerned that--once again--the storyline ends too close to normal. In that, while this woman is consistently referred to as a "bipolar mother," by the end we are are asked to suspend belief in that diagnosis. Maybe it is not her brain but her soul that needs to heal? Maybe her grief was not pathological and she did not need meds, doctors, or the overprotective spouse? Am now also expected to just go cry a little and heal thyself? Not a great message, really. I'd rather have the character continue to struggle--not with normal grief of losing a child--but with the next to normal grief of living everyday in a struggle with the bipolar illness and its "treatments." That would have been, for me, both more real and perhaps even more heroic (and optimistic?).

Lismarie, thank you for such a thoughtful comment. I think the writers probably wrestled with how to end this show, just as many bipolar people and their families struggle to find the right treatment for the disease. The end of the show doesn't necessarily mean the end of Diana's problems. I imagined that she would continue to struggle and I feared her daughter might eventually tread the same path.