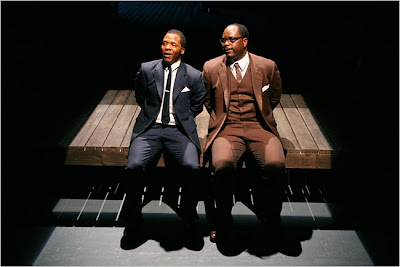 The word “negro” sounds almost archaic at a time when the nation is still basking in the pride of having elected its first African-American president. But, alas, that’s not the thing that struck me as most dated about The Good Negro, the Civil Rights drama that re-opened at The Public Theater on Monday, following a brief run there last year.

The play is a lightly fictionalized version of Martin Luther King, Jr.’s campaign in Birmingham, Alabama in 1963. Perhaps because the King heirs are infamously litigious about how their father’s legacy is used, The Good Negro changes King’s name to James Lawrence, his wife Coretta is called Corinne, his deputy Ralph Abernathy has become Henry Evans.

The main plot centers around their effort to find just the right victim of segregation to become the focus of their protests in the city. Their prime candidate is a mother who was beaten and thrown in jail for allowing her 4 year-old daughter to use a whites-only bathroom instead of making the child pee in a dirty alley way.

Playwright Tracey Scott Wilson recently told the Newark Star-Ledger that she wrote the play to offer a more realistic view of the Civil Rights struggle and its leaders (click here to read the article). She speculated in another interview with the New York Times that some people would be offended that she was pulling these idols off their pedestals (click here to read it).

But I wasn’t offended. I was just bored. Although mine is a minority opinion and most of the critics love this show (click here to see the Critic-O-Meter summary of their raves). I think my reaction might have been different if I’d seen The Good Negro 20 years ago. But over the past two decades I’ve seen the amazing PBS documentary about the Civil Rights movement “Eyes on the Prize” (I’m still praying for them to release an affordable DVD version) and I’ve read the award-winning warts-and-all biographies and histories about King by Taylor Branch, David Garrow and David Halberstam, so the play’s revelations—King and his lieutenants squabbled among themselves, the FBI bugged his home and hotel rooms, King had extra-marital affairs—aren’t really, well, revelatory.

My husband K has reminded me that a play doesn’t have to be an exposé but we both agree that it should have something fresh to say about the situation it presents on stage. And for my money, neither Wilson nor her director Liesl Tommy bring any new insights to the King story. The characters are flatly drawn and given clichés to say. I never felt the passionate commitment that would cause men like King and Abernathy to put aside their personal quarrels and fears for the greater cause of the liberation of their people or the extraordinary charisma that would inspire those people to throw off years of submission to rise up and follow them.

What saved the evening for me (although not for my buddy Bill or for K, who sat restless on either side of me) were the actors. All 11 were terrific but the standouts were J. Bernard Calloway, who captured the alternating empathy and envy of the Abernathy-stand-in, and Francois Battiste as a working-class father of the child, wary of the movement leaders who he knows consider him not good quite as good as they are. I wish the play had centered around one of them.

Or better yet, I wish it had centered around Bayard Rustin, the behind-the-scenes strategist whose communist sympathies and open homosexuality made him the odd-man out among the movement leaders but whose brilliant organizational skills made him too valuable for them to cut loose. In The Good Negro, he is represented by the character called Bill Rutherford, whom the play goes out of its way to identify as a married heterosexual with children. What sets Rutherford apart from the others is that he is married to a white woman, has lived in Europe and is more middle class than the others. The whitewashing of Rustin’s sexual orientation and the reliance on the old shibboleth that middle-class black people aren’t as “authentic” as other black people is emblematic of why The Good Negro wasn’t good enough for me.

I think you've got an interesting take on the play because of your familiarity with the characters they're based on, though I'm sorry that this stopped their fictional counterparts from coming alive. (The tension of that card ride to the jail, the camaraderie--and rivalries--within the Movement, the minister's confession to his wife: these were all solid dramatic moments for me, especially when presented with juxtaposed counterpoints.)

I always wonder what it would be like to see the show through different eyes and with different experiences, so I'm thankful that the Internet gives me the opportunity to read well-considered opinions by other writers. The only qualm is that I think you confused Rowe for Rustin. In "The Good Negro," Rowe is the racist that the FBI installs in the KKK, and I don't remember there being much focus on his family. (That he, a white man, was married to a white woman, does not set him apart.)

So far as the whitewashing of homosexuality, then, that didn't bother me, although there's a bit of interesting banter between the two FBI agents, and their anecdotes, especially when one relates that sometimes there's really just no way to explain the deep-rooted tradition of certain families that causes racism (or sexism, homophobia, &c.).

Many thanks for your comment. And thanks, too, for pointing out that it wasn't Rowe who was standing in for Rustin but the character named Bill Rutherford. I've corrected that so future readers won't get confused.