The Backstory on Patti's Final Showstopper 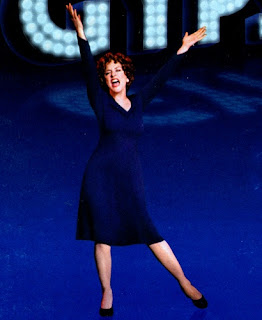 No; it's not my usual posting day but I’ve been away for over a week and I’ve missed you guys. Besides, I just heard something that is too delicious to keep to myself and too big for a tweet.

I got back to the city to find almost everyone, including my fellow bloggers Steve on Broadway and Sarah B at Adventures in the Endless Pursuit of Entertainment, buzzing about how Patti LuPone literally stopped the show during the penultimate performance of Gypsy on Saturday night to yell at someone in the audience who started taking pictures of her as she sang “Rose’s Turn.” My pit musician-husband K who played in the Gypsy orchestra immediately started lamenting the fact that our vacation had kept him away from being there for the historic moment.

Now I hear from an insider who was there that the whole incident was a simple misunderstanding. It seems that Patti had a photographer following her around backstage for several days doing a magazine article about her and the poor fella went around front to document some of her iconic moments in the show. And says my source, “That was the person she had thrown out! She forgot he was there!”

How can you not love Broadway?

Holy cow! That is incredible.

Hmmm, you'd think once she stopped the show and saw the photographer she would have realized that she made a mistake. I mean, if he'd been following her around for several days wouldn't she have recognized him? I'm also assuming he had something a little more powerful than your normal tiny digital camera. But maybe by that time, she was embarrassed and kind of had to follow through or maybe it was the heat of the moment and she simply did forget.

Still, the fact is people "do" try to take photos and talk and are otherwise impolite, even if this incident was legit. So on principle, she was right, even if she was wrong this time! ;-)

Thanks for the story behind the story. And I hope you and K had a wonderful vacation.

Patti said something in an interview on CUNY about needing two different types of glasses...perhaps she doesn't see well enough without them to recognize the reporter.

And Esther, the house lights were never brought up so she couldn't have seen him any more clearly.

Thanks for setting the record straight B&M. And as an addendum to SarahB's point, the photographer as in the back of the orchestra section, following the path of Ms. LuPone's index finger (I was in the fourth row of the orchestra...)

Thanks Steve and Sarah! I'm getting a much better picture now. ;-)

Thanks to all of you for the great back and forth on this. As far as I'm concerned, the whole thing just makes Patti all the more lovable.

Maybe lovable, but not for me,
I didn’t like her in Gypsy. I hope someday there will be revival of Gypsy with an actress who fits the role better. I haven’t seen so unfocused and not believable performance on Broadway so far. It’s my personal opinion of course.
:)