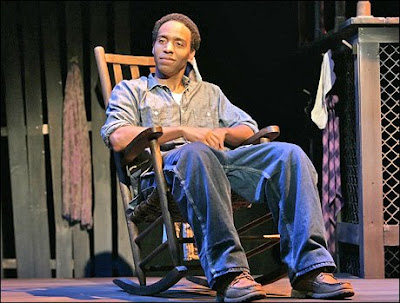 Of all the plays produced by the Negro Ensemble Company, the one that always makes me smile whenever I think of it is Home. That’s partly because it’s hard to find a more endearing piece than playwright Samm-Art William’s paean to the rural black South of his childhood. But it’s also because my friend Sidney worked for the company back in 1980 and I remember how thrilled everyone there was when the show moved from a run at the St. Marks Playhouse down in the East Village to the Cort Theatre on Broadway, where it played for over 250 performances and was nominated for a Tony.

It wasn’t the first NEC play to make that move but Home’s relocation may have been the most joyous. Williams had started off as an actor with the company but also attended its Playwrights’ Workshop. He has said he wrote Home when he was stranded in New York one holiday season, too broke to afford the ticket home to North Carolina to see his parents for Christmas. Now, the Signature Theatre Company has brought the play back in a sweet revival that is the second production in its season-long tribute to the NEC.

Home tells the story of Cephus Miles, a man who loves the land, his neighbors and his sweetheart Pattie Mae Wells. The stage directions are intentionally plain (“it is of the utmost importance that this play be directed very simply and free of excessive choreography,” Williams writes in his author’s notes); the language poetic, sometimes breaking into song; and the humor good-natured as Cephus speaks directly to the audience about his fondness for farming, fishing, friends and his sometimes cynical faith in God.

His idyll is upset when Pattie Mae goes off to college and jilts him and his way of life. And gets even worse when he is jailed for refusing to serve in the Vietnam War and later migrates to a northern city. Without being too heavy-handed, Williams created an allegory of the African-American experience that reflected the romantic view at the time that urban life had become destructive for many black people and that the best alternative was to return to the south where new opportunities were opening up but old values like hard work and friendship were still valued.

The passing years have made his message somewhat less potent in the current Obama era. My 29-year-old niece Jennifer was restless and left before the talkback session began after the performance she, her mom and I attended. But you can’t fault the three talented actors in this production.

Kevin T. Carroll plays Cephus with just the right mix of naïveté and moxie. He is well supported by January LaVoy, who plays Pattie Mae and several other characters, both male and female; and Tracey Bonner, who is listed in the Playbill as Woman Two but also plays an array of roles. And director Ron OJ Parson wraps them in a production that conveys the comforting feel of a well-told fable.

I confess that the show didn’t quite live up to my memories of the original (whose cast included L. Scott Caldwell, now playing Rose on the TV show “Lost”). Still, it did hit enough of the right notes to bring a smile back to my face and to make me feel comfortable about going Home again. Yesterday, the run was extended through Jan. 11 so there’s time for you to make the trip too.

I'm so glad you were able to revisit a play that you loved. Your reviews really makes me wish I lived in New York! There's just so much great theatre to see off Broadway. Hopefully I'll get to the Signature someday.

But you raise an interesting point about the relevance to a younger audience. I'm going to see A Raisin in the Sun at Trinity Rep next month and I kind of wonder the same thing - How potent will it be in the Obama era?

I think the story - about a family struggling to better its circumstances - is compelling and timeless but still, it's a different and exciting era that we're entering. And it'll be interesting to see what a new generation of African-American playwrights has to say.

And I appreciate the Lost reference! I like Rose but unfortunately her character has only been on sporadically in the past couple of years. But I didn't realize she had a theatre background. That's really interesting. Michael Emerson, who plays Ben, also comes from the stage. He was in The Iceman Cometh with Kevin Spacey.