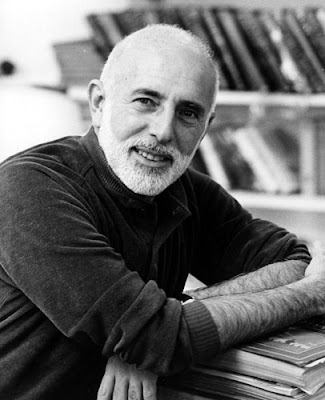 This is going to be a shorter-than-usual post and it may look different too, due, as they say, to technical difficulties. The hard drive on my computer has crashed and burned out. The folks at the big Apple Store on Fifth Avenue say it will take up to five days to install a new one and much of what was on the old drive is lost forever. My always-there-for-me husband K has loaned me his old laptop but it doesn’t have any of the stuff I usually use to research and write my entries and it only has a slow dial-up modem instead of my computer's high-speed internet connection. But what really got me down is that I worried that I wouldn't be able to write about the legendary choreographer and director Jerome Robbins and the extraordinary exhibit on his life--”New York Story: Jerome Robbins and His World”--that is currently at the New York Public Library for the Performing Arts but is closing next Saturday, June 28. So please bear with me while I do the best I can under stressful circumstances.

It’s hard to find a more controversial figure in Broadway history than Robbins. When I’m not seeing a show, or writing about one, I’m often reading about shows and the people who make them. Over the years, I’ve found that Robbins is usually described pretty much the same way: incredibly talented, incredibly difficult to work with, and, for many, incredibly unlikeable. I suspect the latter stems largely from his decision to testify before the House Un-American Activities Committee and name people who had been members of the Communist Party, an association that cost careers and even lives during the Red Scare hysteria of the 1950s. And yet, even people who were angriest with him--Arthur Laurents, Zero Mostel--continued to work with Robbins after he informed because he was a genius.

If he’d lived, Robbins, who died in 1998, would be turning 90 this year. The New York City Ballet, where he had as long and illustrious a career as he did on Broadway, has paid him tribute this spring with a two months-long retrospective of his works. And I’ve been holding my own Robbins celebration. I went to one of the City Ballet performances centered around his collaborations with Leonard Bernstein--”Fancy Free”, the dance that made Robbins’ name and that was later expanded into the musical On The Town; “Dybbuk”, an adaptation of a Jewish fable; and, of course, the “West Side Story Suite.” The ballet dancers didn’t quite capture the sassy spirit of the pieces but I loved seeing his showstoppers. I’m also reading Amanda Vaill’s massive biography of Robbins, “Somewhere.” I even went to see a film about his attorney Floria Lasky (a character in her own right, who was famous for her big hats and who represented a bunch of big theatrical names including Robbins, David Merrick, Tennessee Williams and Gypsy Rose Lee). But it was the Library’s exhibit that really made Robbins come alive for me.

Robbins was a pack rat. He saved everything and the exhibit has put as much of it on display as possible. There are family photos and rehearsal photographs, letters to and from friends, annotated sheet music and autographed show posters from the musicals he did, sketches he drew (he was a pretty good artist too) and portraits some of the world’s most famous photographers took of him, report cards from his grade school and profiles in magazines like “Esquire”, which, in 1948, called him “The Hottest Thing in Show Business.” All the awards he won--Emmy, Oscars, Tonys, National Medal of the Arts, Kennedy Center, the key to the city of Washington--are there, as are costumes from shows like Peter Pan, Fiddler on the Roof and West Side Story. And in the back is a wall filled with TV screens showing interviews with Robbins and his collaborators, scenes from shows and ballets he did and excerpts from a few rehearsal sessions that, as short as they are, still convey a visceral sense of how exacting he could be. I spent over two hours and still couldn’t get through it all.

Jan - So sorry to hear about your computer crashing. I know from experience that it can feel like a major loss. So glad you're still able to post.

Thank you for you great story about the legendary Jerome Robbins, who himself could make perfect fodder for a musical himself (no, I'm not talking Jerome Robbins' Broadway, but particularly about what motivated him (and others like Elia Kazan) at such a volatile juncture of American history).

All I can say is that your post should inspire others to delve more deeply into the crosshairs of the fifties. I know you've done that for me.