The Wonders of "August: Osage County" 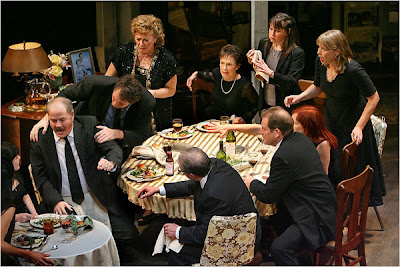 New York theater lovers are luckier than most. We have regular access to amazingly gifted actors, directors and designers. When a show is a hit somewhere else, it usually makes its way here, often with its stars. But what we don't always get to see are the often-equally talented people who do most of their work in cities outside of New York. And it's even rarer that we get a whole cast of them appearing in a show that was a bonafide hit in another part of the country. That's what makes the Steppenwolf Theatre Company’s production of August: Osage County so wonderful.

People lined up in Chicago last summer to see Tracy Letts's three-act play about a large dysfunctional Oklahoma family. The production dominated the Joseph Jefferson Awards that honor theater in Chicago, winning best play, best director, best actress in a drama, and three other categories including best ensemble (click here to read a wonderful cast blog about the making of the Chicago production). Now, nearly all of the original 13-member cast, sensationally directed by Anna D. Shapiro, are recreating their roles in the production that opened last night at the Imperial Theatre on Broadway. And they're all terrific. But the most terrific is Deanna Dunagan, who plays the clan's pill-popping, sharp-tongued matriarch (she's the one wearing the pearls and seated at the head of the table in the photo above).

Steppenwolf actors aren't total strangers to New York; many of the cast members' Playbill bios lists credits for Broadway and off-Broadway shows and even for the various “Law & Order” TV series that are the bread and butter jobs for New York actors. But Dunagan seems to have done most of her work in what we New Yorkers call the hinterlands—in Chicago, where she's won three Joseph Jefferson Awards including one for August: Osage County, in Madison, Wisconsin and Louisville, Kentucky and Washington D.C. I don't know what took her so long to get to New York but I’m mighty glad she came.

In fact, my friend Ellie, the erstwhile actor and current poetry professor, and I were pretty pleased about the whole evening. I'd worried beforehand about how I would respond to the show because I'd gone into it with such high expectations. Other friends who'd managed to see previews before the stagehands' strike shut down Broadway told me it was not to be missed. Even some people I'd just met at a party over the weekend started singing its praises. I usually find that few shows can live up to that kind of build up. And I also worried about making it through the show's three hour and 20 minute running time. (There are two intermissions and so many people were late getting back to their seats after the first one at the performance Ellie and I attended that the actors had to add some pauses to their dialog so that important lines wouldn’t be missed while the latecomers settled back into their seats.) But after a first act that struck me as a trifle twee, I had a great time. It’s been a while since I’ve laughed out loud as much as I did watching August: Osage County.

And that's something you wouldn’t necessarily expect because August: Osage County is another dysfunctional family play, reminiscent of Eugene O’Neill's Long Day’s Journey Into Night, Lillian Hellman's The Little Foxes, Horton Foote's Dividing the Estate, Sam Shepard's Buried Child and dozen of others. Letts, a member of Steppenwolf as both an actor and a writer, has acknowledged the influence of those earlier works but he has also said in interviews that he based the play on his own family. And he finds just the right balance between humor and pathos that brings a freshness to this familiar trope and a renewed recognition of how the pains of one generation are transferred to the next. You might not want to go to the Letts family reunion but the characters it has inspired make for fascinating company on stage and a show that critics are already proclaiming the must-see of the season.

But it’s Letts' other family—his Steppenwolf brothers and sisters—that I left the theater wanting to spend more time with. "It was great to get see those Steppenwolf actors," Ellie remarked as we walked to the subway. Indeed. Watching their wonderful work made me envious of my blogger buddies Steve on Broadway and Terry Teachout who regularly get to visit theater companies around the country. I bet there are other Deanna Dunagans out there. In the meantime, though, I consider myself very lucky to have seen this one.

I definitely agree with everything you've written.

I never would have seen "August: Osage County" if it hadn't been for Steve's rave review from Chicago.

Of course, I knew about Steppenwolf's reputation and about all of its famous alumni, but I'd never seen a production. It was a great reminder just how much wonderful theater there is all over this country and so many talented actors.

I knew the play would be a dysfunctional family drama along the lines of "Long Day's Journey Into Night," but I didn't expect that there would be so much humor. Tracy Letts has written some very funny, biting dialogue.

And as I've said before, I think he does a great job writing about the pressures that many women feel in their everyday lives. There were many things in this play that really hit home with me.

B&M: I can't tell you how absolutely thrilled I am that you enjoyed this breathtaking show.

When I first went to see it in Chicago, I was told by someone associated with Steppenwolf that it would be the fastest three hours I ever spent in the theatre. The lobby was positively buzzing during each intermission with people turning on their cell phones to tell others just how amazing the show was - something I had never seen anyone do elsewhere.

Deanna Dunagan completely deserves a Tony. And to your point about where has she been, well, she's been entertaining Chicago audiences for years. Nice of the Windy City to share, don't you think?

This show is incredible!! A friend of mine said it was just as thrilling as Albee's Virginia Woolf when it hit Broadway. Thank goodness for Chicago and Steppenwolf.

Thank you! Coming back home to Toronto I knew it would be hard to descirbe this show to my Sorkin crazy siblings. "Too much head, not enough heart" is perfect. And that 2 tier set gave me a pain in the neck. Yikes. But I must say that Jimmi Simpson was very impressive.

Thank you for posting this review! August: Osage County is a play i've been meaning to see for a long time and it's great to finally find a review of it.