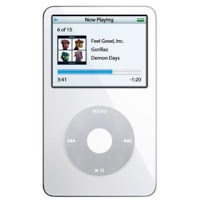 You can tell if someone is a true wine geek by whether they have a special refrigerator for wine in their small New York City apartment. Serious movie geeks collect Criterion Collection DVDs the way Soviet bloc dissidents used to exchange samizdat literature—obsessively, possessively and with deep reverence. And now, I think to earn stripes as the geekiest of theater lovers there has to be at least one theater podcast on your iPod playlists. If you type the word "Broadway" into the iTunes search box, you get 124 choices. Not all of them have to do with the Broadway we love—for some reason, a few churches show up—but there are still plenty of options, from slick professional productions to painfully amateurish ones. Here are four of the best:

American Theater Wing’s Downstage Center. These recordings from the XM Satellite Radio show, most of them running about an hour, are like dispatches from an alternate universe where Charlie Rose interviews only theater people and doesn't hog the conversation so that you can actually hear what the guests have to say. The hosts, XM Program Director John Von Soosten and the Wing's Executive Director Howard Sherman, do their homework and actually ask the questions you want to know. Their recent guests have ranged from Xanadu's peppy Kerry Butler to Frost/Nixon's always-eloquent Frank Langella. Among my favorites are Actor Jeff Daniels on coming of age as an actor at Circle Rep and the Wall Street Journal critic (and my fellow blogger and friend) Terry Teachout on why he prefers blogs to newspaper reviews. New episodes are posted weekly but a whole year's worth of interviews are available on iTunes. But be careful because they're addictive.

Manhattan Theatre Club. I'm the kind of person who always heads straight for the audio tour desk at museums. And when I'm lucky enough to catch one, I also stay for the audience talks that off-Broadway theater companies sometimes give after performances. MTC has had the good sense to record theirs and upload them on iTunes. Unfortunately, their good sense seems to have run out when it came to hiring technical talent. Some of the podcasts wouldn't play on my new-model iPod and there are long stretches of silences on others when unmiked audience members get to ask questions. During one session, the moderator chided a questioner for asking an inappropriate question while the actors were on stage; what I wouldn't give to know what that question was. Hasn't anybody on the MTC crew heard of editing and splicing? Kvetching aside, this podcast is on my list because when you can hear what's going on, it's terrific. I wasn't a fan of last season's production of Brian Friel's Translations, primarily because the Irish brogues were so thick neither I nor my friend Bill could understand what the actors were saying and, after a while, gave up trying. But listening to the actors and a professor brought in to set the play in historical context made me wish I'd tried harder and eager to see another production. No new episodes have been posted since July but MTC has a great new season coming up (starting with Theresa Rebeck's eagerly anticipated Mauritius, which opens Oct. 4) and I'm hoping that will revive its podcast offerings.

Masterworks Broadway. Let me say right off the bat, that these podcasts are advertorials from Sony designed to lure you into purchasing the CDs of the artists featured. But that doesn't mean the interviews aren't good. Damn good in the case of the "Legends Series" which gets stage musical celestials like Angela Lansbury and Barbara Cook to reminisce about their careers, accompanied by tantalizing snippets of their show-stopping moments on original cast recordings. Lansbury packs more information and emotion into her 16 minute and 53 second session than a shelf full of liner notes could. The schedule for new entries is irregular, timed to the release of special recordings and boxed sets, but there are about 20 episodes now available, including four Legends. Whether you go, as instructed, to the Sony website and buy the albums is optional but downloading these gems shouldn't be.

BroadwayLiving.com. In some ways, this is my favorite podcast. And it's updated weekly. The theme is making a living on Broadway and journeymen actors James Chip Leonard and Roger Seyer put the spotlight on folks who don't normally get a chance to shine—swings who have to cover all the parts in the chorus, stagehands who move the sets, dressers who help the stars change their costumes and tend their secrets. They tell stories about what brought them to Broadway and what makes them stay. They all clearly love what they do and you end up loving them too.

But the best thing about these podcasts is that if you have an iPod or some other kind of MP3 player, the cost of admission to them is free. So click on, kick back and enjoy.

Wow, I guess I've attained full geek status, because I've got at least a half-dozen theater-related podcasts on my iPod!

I love the Downstage Center interviews because they're so in-depth. There was one a few months ago with Marian Seldes that was excellent. You're right, they are addictive. I've even gone to their Web site to download ones from a few years ago. I just wish they included the music, like they do when they first air on XM Satellite Radio.

I hadn't heard of the Broadway Living podcast. I'll have to check that one out! Some others I like include AP on Broadway, Broadway Bullet, MusicalTalk.

Also, some shows, such as PRI's Studio 360 and NPR's Fresh Air. will sometimes have a theater-related segment. And, finally, Times Talks, the New York Times speakers series, usually has at least one theater-related program per season. In May, they had Frank Langella and Peter Morgan. Tom Stoppard is coming up in October. And they're usually available as podcasts.

Thanks for your kind words about Downstage Center. At the risk of feeding your addiction, be aware that the complete roster of past "DSC" shows is available for download directly from the American Theatre Wing website, www.americantheatrewing.org -- all 168 of them (to date). Our TV show "Working in the Theatre" is available there as well. From your friends at the American Theatre Wing.

Appreciate the heads-up. I just got an iPod for my birthday, so it's nice to know where I can turn to get my fix of Broadway even when I'm flying.

Many thanks to all three of you for your comments.

To Esther: I downloaded both Broadway Bullet and Musical Talk after reading your comment and have become a fan of the latter because it's so much fun to get a British perspective on theater on both sides of the ocean.

To My American Theatre Wing friends: I'm delighted that you're reading Broadway & Me and rest assured that I'll be making my way through all 168 of the "DSC" shows.

To Steve: HAPPY BIRTHDAY! and happy listening too.

that is nice one informative. I like this information. keep it up. I want to know that it is possible to that we can see tv downloads in the ipod..
plz add this information also..