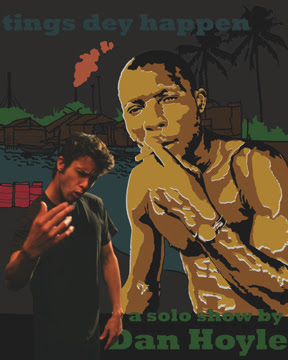 It's far too rare these days when you walk out of a theater debating the ideas in the play you've just seen but that's what happened after my friends Lesley, Ed and I saw Tings Dey Happen, the one-man show at the Culture Project's theater in Soho that is scheduled to run through Sept. 23.

The Culture Project prides itself on "documentary theater" that combines opinionated commentary on social and political issues with performance art. Its past productions have included The Exonerated, soliloquies culled from interviews with former death-row inmates; Guantanamo, a drama about the U.S. detainees in Cuba; Bridge & Tunnel, Sarah Jones's deft dissertation on immigration and assimilation; and My Trip to Al-Qaeda, Lawrence Wright's Spalding Gray-like monologue about the origins of the terrorist group based on his Pulitzer Prize-winning book, "The Looming Tower."

Tings Dey Happen, written and performed by the smart, energetic and very talented Dan Hoyle, examines how the exportation and exploitation of its oil resources are threatening to destabilize Nigeria, the region and, inevitably, the rest of the world. Hoyle, 27, traveled around the oil-rich Niger Delta area of the country for 10 months as a Fulbright scholar in 2005 and 2006. He talked to warlords, diplomats, oil company expats and everyday Nigerians and he impersonates all of them in the show. And that's what Lesley, Ed and I were debating. For Hoyle is a young white American and many of the characters he portrays are black Africans.

"Is this going to be a blackface show," my husband K asked when I first told him about Tings Dey Happen. Well, there's no darkening of skin. But Hoyle does imitate the pidgin English that some Nigerians speak. He bulges his eyes and twists his lips to suggest the way they look. He puffs out his chest, sticks out his butt and adopts a loping walk to mimic their posture. He makes jokes about them. It's all the stuff that minstrel shows used to do. And yet it's clear that Hoyle respects his subjects and is serious about the issues they face (click here to listen to an hour-long interview Hoyle and his director and co-collaborator Charlie Varon did with San Francisco's public radio station KQED). Hoyle, whose dad is the highly respected mime and clown Geoff Hoyle, also uses the same techniques to recreate the whites in his piece. But in his efforts to delineate characters as he switches from one to the other, sometimes in conversations among as many as three or four of them at a time, he strays into caricature and that raises knotty questions like whether people of one race should be able to portray those of another and whether it's OK to laugh when a white person is making fun of black people, even if the jokes are funny.

Once K, who is openly prejudiced against one-person shows, said he wasn't going to break his ban and see this one despite his interest in the subject matter, I thought it would be interesting to see it with Lesley, who’s an artist, and Ed, a documentary filmmaker. They are adventurous in their artistic pursuits and well informed about geopolitics. You may have seen Ed's work on Afghanistan, Iraq and Pakistan on "Frontline" or the Ted Koppell-era "Nightline." They are both white and Lesley said Tings Dey Happen made her uncomfortable, especially when the audience at our performance, also, with the exception of me and two other women, white, laughed at the funny way Hoyle depicts so many of his black characters, particularly Sylvanus, a fey stage manager who serves as narrator and comic relief.

I also shifted around uneasily in my seat as I watched him (click here to see him in action) but what really unsettles and ultimately matters is Hoyle's cautionary reminder that the complexities of oil politics and the fragility of African democracy have created a smoldering powder keg that is just a careless spark or two away from full conflagration. That makes for truly explosive theater, worth debating and worth seeing.

Note: special thanks to my buddy Bill for his great blogs while I was away

(Thanks for your kind words about my guest blogging.) Like your husband K, I too have a real animosity for one-person shows, so I won't see this one. But I think the broad point your raise--ie, about the role that race of an actor plays in how an audience responds to a character onstage-- is an important and interesting one, especially in an age where "non-traditional" casting is getting more prevalent. Sometimes such casting doesn't affect me in any way at all; I just want the performance to be good. But sometimes it does. Sometimes it can take me out of the play, particularly when it involves characters who are meant to be blood relations. Some time ago, I saw Denzel Washington give us a very nice Richard III in Central Park, but some of his immediate relations were white, some black, and in the already-confusing family situation that Shakespeare created I sometimes found myself REALLY puzzled as to who was whom. Most recently, I chose to invent a backstory for myself alone that in the Roundabout revival of "110 in the Shade," the late wife of the John Cullum character must have been black, because two of his children (Audra McDonald's Lizzie and also her older brother Noah) were clearly not exclusively Caucasian. Worked fine for me. But I've long remembered something that Leontyne Price said when asked why she never sang Desdemona in Verdi's "Otello." (With her particular voice and acting, she would have been superb, and the world of opera is filled with color-blind casting.) She replied that she always felt that "Otello" should be a story about a black man and a white woman. Well, yes, but...boy, I would love to have seen her onstage in Act IV singing Verdi's gorgeous Willow Song! Would it have mattered that a black woman was playing a white one? As Rodgers and Hammerstein's King of Siam said, "Is a puzzlement!"