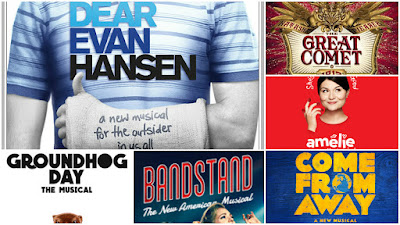 It's hard not to be won over by Dear Evan Hansen, the new musical that has made a triumphant transfer from Second Stage Theatre, where it played last spring, to Broadway's The Music Box theater, where it seems destined for a very long run.

A wholly original show, Dear Evan Hansen has a book by Steven Levenson that deals sensitively with such contemporary issues as teen suicide, economic disparity and the power of social media. And it also features a score by Benj Pasek and Justin Paul that echoes the sounds of today, while respecting the time-honored conventions of musical theater (click here for my review of its off-Broadway production).

In fact, under normal circumstances, Dear Evan Hansen would be a shoo-in for this year's Tony for Best Musical. But there's nothing normal about this Broadway season. At least 12 shows will be eligible for the four, or maybe five, nomination slots and seven of those shows haven't yet opened.

Yet what strikes me as even more exciting is the fact that the winner is likely to be, just as it was last year when Lin-Manuel Miranda's Hamilton took the top honors, created by a Gen-Xer or maybe even by Millennials, like the just barely thirtysomething year-olds Pasek, Paul and Levenson.

Now to be sure there are anticipated shows by talented old-hands. Marc Shaiman and Scott Wittman, Tony winners for Hairspray, have adapted Roald Dahl's classic children's story Charlie and the Chocolate Factory, with the always-delightful Christian Borle as the eccentric candy maker Willy Wonka. It opens at the Lunt-Fontanne on April 23.

Meanwhile, Scott Frankel and Michael Korie, creators of the cult classic Grey Gardens, have turned the rivalry between cosmetics divas Helena Rubinstein and Elizabeth Arden into War Paint, a showcase for the Broadway divas Patti LuPone and Christine Ebersole that opens April 6 at the Nederlander Theatre. And the formidable team of Lynn Ahrens, Stephen Flaherty and Terrence McNally is doing a musical version of Anastasia, the oft-told tale of the Romanov princess whose family was massacred during the Russian Revolution, which will make its bow at the Broadhurst Theatre on April 24.

But there are signs everywhere that the musicals torch has been passed to a new generation and the shows stirring up the most buzz this season are by Broadway newcomers.

Dave Malloy's Natasha, Pierre & the Great Comet of 1812, a pop-opera spin on an excerpt from Leo Tolstoy's "War and Peace," has already opened next door to Evan Hansen at the aptly named Imperial Theatre and received loud cheers from the critics (although a somewhat more muted one from me; click here to read what I thought of it).

And still to come are more adaptations of popular movies, as well as original works whose subjects range from a showbiz story about swing bands in the 1940s to an uplifting tale set against the backdrop of the Sept. 11 attacks.

Amélie is an adaptation of the whimsical film about a shy French woman and her neighbors in the Parisian neighborhood of Montmartre that will open April 3 at the Walter Kerr Theatre with Hamilton's Phillipa Soo in the title role. Its book is by Broadway fave Craig Lucas but the music is by Daniel Messé, leader of the folk-rock band Hem; and its lyrics are by Nathan Tysen, best known for the off-Broadway musical The Burnt Part Boys, both of whom are Broadway first-timers.

Tim Minchin isn't new to Broadway (he got a Tony nomination for the distinctive lyrics he wrote for Matilda) but his age and attitude make him part of the youth brigade and he's coming back with a score for Groundhog Day, a musical version of the 1993 Bill Murray rom-com about a weatherman who gets stuck in a time loop. The show, scheduled to open April 17 at the August Wilson Theatre, was such a sensation when it opened in London last year and its star Andy Karl is so beloved by the Broadway community that Groundhog Day is almost guaranteed a slot on the Tony ballot. 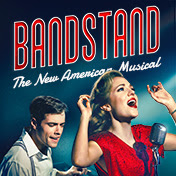 Although his day job has been music director for Cirque du Soleil in Las Vegas, Richard Oberacker has spent his free time writing musicals and now he and his writing partner Robert Taylor seem to have hit the jackpot with Bandstand, their original show about a group of WWII vets vying to win a radio talent contest that will open April 26 at the Bernard B. Jacobs Theatre. Oberacker and Taylor have also been lucky enough to get everyone's favorite ingénue Laura Osnes to star as a girl singer who becomes the love interest for their fictional band's leader played by Corey Cott.

Probably the least known of the new show creators are the husband-and-wife team of  David Hein and Irene Sankoff who have written Come From Away, which is based on the real-life story in which the residents of a Newfoundland town rallied together to provide food, shelter and inspiration for the thousands of passengers who were stranded there when all flights were ordered to land in the wake of the 9/11 attacks. The subject matter and the relative inexperience of the creative team whose previous work has gone little further than fringe festivals might suggest a tough sell but the show has been a crowd-pleaser in its out-of-town engagements from California's La Jolla Playhouse to Toronto’s Royal Alexandra Theatre, where it broke the box office record at the 109-year-old theater. So don't count it out when it opens at the Gerald Schoenfeld Theatre on March 12.

In other words, it's promising to be a really tough season for Tony nominators but a really great one for musical theater lovers.