The Top 10 Shows That I Was Happiest to See in 2016...Plus Some Other Looking Back 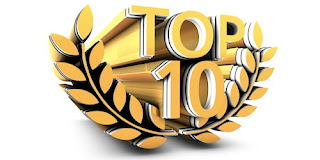 Most 10 Bests list came out around mid-December so I'm obviously arriving really late to the party with this one.  Which is probably OK because I can't even pretend to say which were the best shows of last year—or any year.

The major critics (and my theatergoing buddy Bill) loved The Band's Visit (Bill even bought tickets for a return visit) but I found it to be only so-so and had far more fun watching its star Tony Shaloub as he graciously worked the table and charmed the guests at a cast member's birthday party at a restaurant around the corner where Bill and I had dinner after the show.

Similarly, the critics roundly dissed A Bronx Tale, while I had a good time (click here to read my review).  What I've learned over the years is that there's no one empirical standard and that the best use of the year-end bests lists is as a guide to which critics' taste line up with mine and can serve as reliable guides when I'm trying to determine whether to see something or not.

So I invite you to do the same with mine.  I enjoyed a bunch of stuff this past year and my initial list had 20 shows. My final choices (listed alphabetically) may not have drawn the most critical acclaim or earned the most money but they're the ones that I'm happiest to have seen because they didn't just entertain me but helped me see the world around me differently and did it with distinctive flair:

The Effect: British playwright Lucy Prebble and director David Cromer probed the meaning of love and the greed of Big Pharma in this rom-com about a medical study on an experimental anti-depressant and its effect on both the test subjects and the scientists overseeing it. The result was both thought-provoking and heart-gladdening. 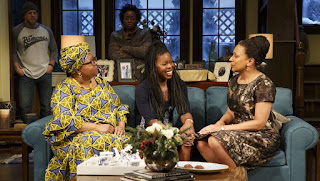 Familiar: Her other play Eclipsed about women caught up in the Liberian civil wars drew most of the attention and a run on Broadway but I also enjoyed Danai Gurira's domestic comedy about a Zimbabwean family at Playwrights Horizons, which, under Rebecca Taichman's skillful direction, dug deeper than we usually see into the experiences of affluent blacks and immigrants living in contemporary America.

Hadestown: Anaïs Mitchell's roots-music spin on the Greek myth of the ill-fated lovers Orpheus and Eurydice was my favorite new score this year. And Rachel Chavkin not only beautifully staged the show  at New York Theatre Workshop but highlighted its allusions to the growing schisms between the haves and have-nots in today's world. 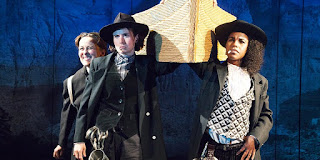 Men on Boats: Just as Hamilton reimagined the Founding Fathers as people of color, Jaclyn Backhaus' witty adventure tale about the 1869 expedition that charted the Grand Canyon cast women as the explorers and she and director Will Davis allowed them to display the kind of swagger and bravado that men—onstage and off—have always enjoyed.

Oslo: The name refers to the 1993 Oslo Peace Accords and playwright J.T. Rogers and director Bartlett Sher have turned the back story about the Norwegian diplomats who brought about that first official agreement between Israel and the Palestinian Liberation Organization into a surprisingly entertaining thriller that Lincoln Center will transfer for a Broadway run at its Vivian Beaumont Theater in April. 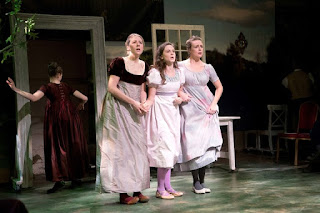 Sense & Sensibility: Even if, like me, you're not a big Jane Austen fan, you'll probably still be delighted by the Bedlam theater company's delightful adaptation of her first novel, which uses story-theater techniques and sensational acting to recreate Austen's tale about love among the 18th century British gentry.

Skeleton Crew: Dominique Morisseau's drama about factory workers facing a plant closing shares a concern about the decline of the American working class with Lynn Nottage's Sweat but Ruben Santiago-Hudson's dynamic staging at the Atlantic Theater and a terrific ensemble made this one hit me harder.

Small Mouth Sounds: It seemed that Rachel Chavkin could do no wrong last year and her staging of Beth Wohl's wonderfully original play about a disparate group of people at a silent retreat didn't make as much noise as Hadestown or Chavkin's much-lauded Broadway production of Natasha, Pierre & the Great Comet of 1812 but it was one of the season's true treats. 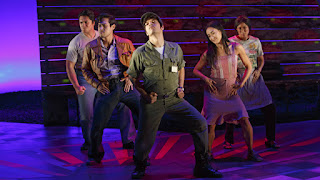 Vietgone: Using rap music, hipster speech and graphic-novel-style video projections, playwright Qui Nguyen and director May Adrales spun a refreshingly different—but ultimately touching—story about the Vietnam War, based on Nguyen's parent's experiences of moving to this country after the fall of Saigon.

The Wolves: The Playwrights Realm focuses on works by "early career playwrights" and it backed a winner with Sarah DeLappe's first-produced play about the members of a girls' soccer team who, under Lila Neugebauer's sharp direction, talk about everything from having their periods to geo-politics.
I also had a good time reading other people's lists and here are five of my favorites that I think you might enjoy too; you can check them out by justing click on the title:

The Most Newsworthy Theater Events of 2016
The New York Theater blog put together a month-by-month rundown of all the year's major theater news, from the we-don't-care-if-there's-a-blizzard success of the first BroadwayCon in January to the debate that broke out last month over whether the Rockettes should perform at Donald Trump's inauguration.

The Best LGBT-Inclusive Shows
Plays and musicals about people all along the gender spectrum have begun to move beyond the traditional coming-out story and The Advocate magazine celebrated the best of them.

The Best Celebrate the Best
In the spirit of it takes one to know one, Playbill asked some of the top people in the theater to name their top theater experiences of 2016.

The Worst Theater of the Year
It's traditional for year-end lists to celebrate theater's best but a bit of schadenfreude can also be fun and amNewYork let's it rip with its list of the biggest flops.

PLUS....
All Things Hamilton
I mean, how can we look back at 2016 without talking about the greatest theater sensation of the year.