"The Present" Attempts to Update Chekhov 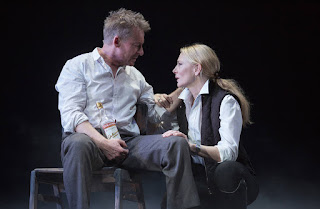 People may be crowding into the Ethel Barrymore Theatre to see Cate Blanchett make her Broadway debut in The Present, her husband Andrew Upton's adaptation of Anton Chekhov's first play Platonov, but I suspect they'll leave singing the praises of Blanchett's co-star Richard Roxburgh and the exhilarating chemistry between the two of them.

Chekhov wrote Platonov when he was just 18 but it wasn't produced until 1923, 13 years after his death at the premature age of 44. The play's main character is Mikhail Platonov, a provincial school teacher who once dreamed of being a writer. And it's intriguing that such a young man should choose to center his story around the frustrations of a 40-something guy entangled in a midlife crisis but it is a play written by a young person.

The melodrama in Platanov is higher than in Chekhov's mature masterworks like The Seagull or The Cherry Orchard but it's fun to see that his archetypal characters (the ineffectual aristocrat, the disillusioned intellectual, the insecure arriviste, the restless middle-aged diva) and his familiar tropes (the beloved country home, the ennui of country life, the agonies of unrequited love, and, of course, a gun that will eventually have to go off) were there from the beginning.

In his youth, Platonov served as tutor to two young men and fell in love with the beautiful young stepmother of one of them. Twenty years have passed when the play opens and the stepmother Anna, now widowed and anxious to remarry a wealthy man who can secure her future, is celebrating her 40th birthday at the family dacha with food, fireworks and lots and lots of wine and vodka.

Her guests include her bumbling stepson and his much-smarter wife, the local doctor and his frisky fiancée, two rich would-be suitors and Platonov and his dumpy but devoted wife. Over the course of the play's four acts and this production's three-hour running time, each of the four women declares her love for Platonov. The result proves tragic.

Upton has updated the setting from its original pre-Revolutionary period of the late 1870s to the post-Soviet era of the early 1990s but he doesn't do much with that, except to lard the dialog with profanity and to underscore the action with punk music that, at one moment, gets the normally regal Blanchett pogo dancing on a table.

But as always with Chekhov, the meat of the drama rests with the psychological interplay between the characters and, under the high-energy direction of John Crowley, this cast, all members of Australia's Sydney Theatre Company, the artistic home for both Blanchett and Upton, sink their teeth deep into it.

Blanchett's movie-star fame makes her first among equals and as, you might expect, she's superb as Anna, equal parts imperious and insecure.  Plus she looks stunning in Alice Babide's subtle but character-defining costumes.

Yet Blanchett doesn't overshadow her cast mates (in fact, she refuses to take the customary star bow and the entire 13-member ensemble bows together for the curtain call).That leaves space for others to shine and two of the standouts are Chris Ryan as Anna's hapless stepson Sergei and Jacqueline McKenzie as his mismatched wife Sophia.

Ryan makes Sergei aware of his inadequacies but resigned to accept them so long as he can hold onto a bit of happiness, which adds a satisfying streak of poignancy to a character who might have just been played as comic relief.

Meanwhile, McKenzie, a look-alike for the young Juliet Binoche, captures the ferocious intensity of a woman who has tried to repress her passions only to find them unexpectedly unleashed (click here to read aninterview with the actress).

But blazing brightest of all is Roxburgh. He exudes a mixture of virile charisma and little-boy neediness that makes it easy to understand why all the women would fall for him.

Roxburgh and Blanchett have been acting opposite one another for over 20 years (click here to read more about that partnership) and they use that history and knowledge of one another to great effect as their characters shift between caring and cruelty.

The Present rambles on longer than I'd have liked but the scenes between the two of them more than made up for the lulls. I'd pay premium prices to see them in a production of Les Liaisons Dangereuses.