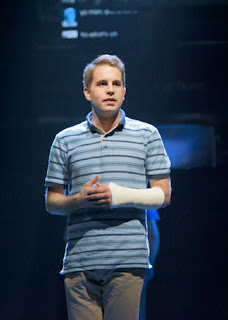 The nominees for this year's Tony for Best Musical are all the kind of big song-and-dance shows that have for years defined the Broadway musical. But I sometimes think the future of the art form will be found in the small intimate musicals like last year's winner Fun Home. Or in Dear Evan Hansen, the appealing show that is playing at Second Stage Theatre through May 29 (although there are already whispers, albeit perhaps only wishful, about a Broadway transfer).

Written by everybody's favorite up-and-coming team Benj Pasek and Justin Paul, Dear Evan Hansen is a completely original show. It's inspired by Pasek's memory of how some kids in his high school claimed to be close friends with a student who died (click here to read more about the genesis of the show).

The musical's book, written by playwright Steven Levenson (click here to read an interview with him) focuses on just one kid, a socially awkward senior named Evan Hansen, who has no friends. His divorced mom loves him but is so busy working double shifts to support them that she's rarely around.

Evan copes by taking anxiety medication, writing motivational letters to himself and pining after a pretty junior named Zoe. One day, he has a chance encounter with Zoe's brother Connor, a druggie and volatile misfit who, in the cruel calculus of high school hierarchies, is the freak to Evan's geek.

Connor snatches one of Evan's more morose letters and when Connor later commits suicide, his parents find it in his pocket. They think their son wrote it as a farewell to his only friend and because Evan doesn't correct that misunderstanding, they gradually begin to treat him as a surrogate son, while others, including Zoe, also begin to find reasons to appreciate him.

The question, of course, is whether Evan will allow the ruse to continue. Because Evan is at heart a good kid, the musical is able to explore the desperate need to belong that all teenagers feel, the pressures today's parents experience as they try to give their kids space without losing closeness, and the role social media now plays in defining the way the world sees all of us.

Because the show is directed by Michael Greif, who specializes in pushing the envelope of what a musical can be and whose resume includes the original productions of Rent, Grey Gardens and Next to Normal, the show juggles these heavy themes with impressive ease—and without forgetting the need to be entertaining.

Kristolyn Lloyd and Will Roland provide terrific comic relief as two other outcasts (she's an overachiever; he's a wiseass) who find ways to take advantage of the mythology that develops around the relationship between Connor and Evan. And kudos to Greif for casting a black actress in a role that is race neutral.

Greif, set designer David Korins, sound engineer Nevin Steinberg, lighting master Japhy Weideman and projections wizard Peter Nigrini are also good at creating an environment of moving scrims, buzzing voices and scrolling images that mimic the way a single moment can be magnified into a viral sensation on the internet.

But the show's real secret weapon is a passionate performance by Ben Platt, who is achingly authentic as Evan, showing both the shy stammering boy who is easy to bypass and the warmhearted one within who is easy to love.

Platt also does a sensational job with Pasek and Paul's melodic but complex songs, even though their tendency to push him into falsetto becomes as much a tic as Evan's stutters (click here to watch an interview with the actor).

A shout-out also has to go to Rachel Bay Jones, who plays Evan's mom. The parents in this show aren't used for comic fodder and Jones is especially poignant as a woman who wants to give her son an easier life than she's had but doesn't know how to do it.

A few critics have complained that the show is too manipulative. But I don't mind having my emotions worked over when it's done well. And Dear Evan Hansen plays equally to the concerns of the middle-aged people who tend to buy most theater tickets and to those of the young people who we all hope will do so in the future.

I was so pleased to read your positive review of Dear Evan Hansen. It's one of the six shows that I'll be seeing next week when I make my yearly trek to New York for the sole purpose of binging on theatre. I chose the show based on the reviews from Washington DC and because I like the work of Pasek and Paul. I thought their score for A Christmas Story was very good and the one for Dogfight was superb. Thanks also for the links to related articles and interviews. You always do an excellent job in providing those - especially around Tony time!

broadwayandme said...
This comment has been removed by the author.
Tuesday, May 10, 2016