History Class: "Shuffle Along" and "Indecent" 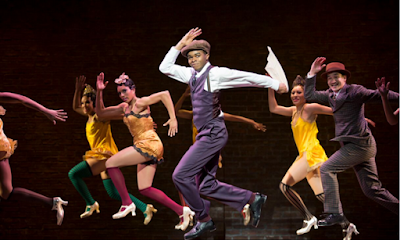 Show biz people love shows about show business, especially ones in which a band of artists overcome some adversity to put on a show. And right now, two productions about works that broke through barriers almost 100 years ago are playing to sold-out houses on Broadway and off.

The first is Shuffle Along or The Making of the Musical Sensation of 1921 and All That Followed, George C. Wolfe's tribute to the all-black show that introduced the jazz sound to Broadway. Now playing at The Music Box with an all-star cast lead by Audra McDonald, Brian Stokes Mitchell and Billy Porter, it's drawn 10 Tony nominations including for Best Musical.

The second is Indecent, a play with music at the Vineyard Theatre that playwright Paula Vogel and director Rebecca Taichman created to tell the backstory of The God of Vengeance, a Yiddish-language play credited with presenting the first lesbian kiss on Broadway back in 1922.

They're both labors of love that are brilliantly staged and performed but their well-intentioned desire to right history's wrongs gets in the way of either being totally successful. Still, each is worth seeing.

Wolfe discovered Shuffle Along when he was in college. He says he couldn't understand why the show, a collaboration between the vaudeville duo of Flournoy Miller and Aubrey Lyles and the song-writing team of Noble Sissle and Eubie Blake, wasn't better known and more celebrated. Over the years, he decided to do something about that (click here to read my Playbill interview with him).

As Wolfe's subtitle suggests, Shuffle Along created a sensation when it first opened, showcasing the syncopated rhythms and show-stopping dance numbers that would define Broadway musicals for years, as well as introducing such talents as Paul Robeson, Josephine Baker and Florence Mills.

The original production, which included the first serious African-American romance on stage and the classic song "(I'm Just) Wild About Harry," ran for 504 performances and became the first Broadway show that allowed black ticket buyers to sit in the orchestra section instead of a segregated balcony.

In a futile attempt to avoid going up against Hamilton, the new Shuffle Along's producers tried to get the Tony committee to classify their show as a revival (click here to read more about that) but it maintains only snatches of the original's silly plot about a three-way mayoral race in a place called Jimtown that leaned heavily on the stereotypical minstrel humor that would make most audience members flinch today.

Instead, the 2016 version is a typical backstage musical. The first act focuses on the struggles to bring the show to Broadway and the second act looks at what happened after it became a success.

There's a lot to tell (biased theater owners, near bankruptcy, battles over creative differences) and Wolfe's book jumps from anecdote to anecdote, occasionally pausing to unleash a barrage of history that he accumulated during his decades of research.

And because he has to juggle five lead characters—the show-within-a-show's four creators plus their female star Lottie Gee—it's hard to really invest in any of it. Or it would be if the performances and the staging weren't so terrific. 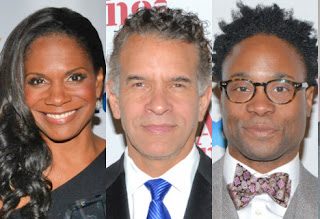 It's hard to go wrong with a show starring three Tony winners, including McDonald who has a record-breaking six, although there will be no chance for a seventh this time out since she wasn't nominated despite giving another bravura—and surprisingly funny—performance (click here to read a profile of the actress).

But, as with the original 1921 production, what really makes this show is the dancing.  Savion Glover, who last collaborated with Wolfe on Bring in 'da Noise, Bring in 'da Funk, has blended his explosive style of tap and old-school hoofing into a thrilling mix that's performed by an ensemble of apparently tireless young dancers (click here to read more about the choreographer).

I'll confess that I was disappointed that the new Shuffle Along didn't recreate more of the original or fully explain its magic but I do appreciate how it captures the visceral excitement that caused those earlier theatergoers to sit on the edge of their seats.

I had a similar experience when my theatergoing buddy Bill and I went to see Indecent, which opened yesterday and is currently scheduled to run though June 12.  As Wolfe did with Shuffle Along, Taichman discovered a now-almost-forgotten play called The God of Vengeance when she was in school and has long wanted to do something with it.

Written in 1906 by the Polish-Jewish writer Sholem Asch, the play tells the story of a brothel owner who wants to marry his innocent daughter to a Talmudic scholar only to have her fall in love with one of his prostitutes, setting off a series of tragic consequences. But, again like Wolfe, Taichman was even more fascinated by the story that surrounded the play.

The God of Vengeance was performed throughout the Yiddish-speaking communities of Europe and even for the Jewish immigrants on New York's Lower East Side. But when a translated version opened on Broadway, complete with the famous rain scene in which the women consummate their love, the cast was arrested on charges of moral indecency. 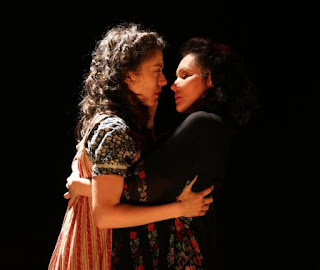 Taichman recruited Vogel to help tell that tale. They've chosen to do it through the experiences of the acting troupes that performed Asch's play over the years. An everyman stage manager serves as the connective thread that ties those narratives together.

The resulting story is more cohesive than Shuffle Along's (and at 90 minutes, more succinct than Shuffle's 3 hours and 40 minutes) but Indecent also overestimates the audience's interest in the minutiae of the play's history, too often substituting dogma for drama.

But, once again, the staging trumps those shortcomings. Vogel and Taichman enlist a range of Brechtian techniques to tell their story: seven actors and three musicians sit in chairs onstage when they're not performing, change costumes in front of the audience and perform both traditional and original music that underscore the Jewish tradition and its later devastation during the Holocaust.

The opening scene is stunning.  And the cast is superb, particularly Richard Topol's compassionate portrayl of the stage manager Lemml, and Katria Lenk, a mesmerizing beauty who plays several different actresses.

The history Shuffle Along and Indecent provide is a little heavy-handed but the spirit with which they deliver it is buoyant.