"Fire and Air" Fails to Ignite Any Passion 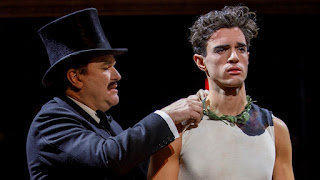 The creative ferment at the beginning of the last century rivaled that of the Renaissance. Painters like Pablo Picasso and Vasily Kandisnky restructured painting. Composers like Claude Debussy and Igor Stravinsky reconfigured sound.

In the midst of it all, working with all of them, was Sergei Diaghilev, the scion of a wealthy Russian family who had little innate talent of his own but possessed an unparalleled affinity for art that lead to his becoming a visionary impresario and the subject of Fire and Air, the new play by Terrence McNally that opened this week at Classic Stage Company.

Diaghilev created the legendary Ballets Russes, championed such dancers as Vaslav Nijinsky and George Balanchine and commissioned such scores as "The Firebird" and "The Rite of Spring." And he spent oodles of money to transform this work into such daringly innovative productions that audiences sometimes rioted when they saw them.

An unabashed hedonist, he also loved good food, rare books and beautiful men. In short, Diaghilev is a great subject for a play about what it takes to make great art. Which makes it even sadder that Fire and Air isn't a good show.

McNally says he's been working on it for years and had originally envisioned a tribute as large and colorful as the man himself. But, under the direction of the notorious minimalist John Doyle, the show has been trimmed to just six actors who trudge through Diaghilev's life on a nearly bare set that Doyle has underdecorated with two large mirrors and five gilt-colored chairs (click here to read about the show's evolution).

Bits and pieces of Diaghilev's biography—his fear of drowning, his fondness for dandyish clothes, a long-running relationship with his cousin—are cited (actually recited since the play is more tell than show) but they pass by in a stream of scenes that are no more involving than reading an excerpt from Diaghilev's Wikipedia bio would be. There's no sense of why we should care about this man and no real conflict to pull us into his story.

McNally does attempt to build a narrative around Diaghilev's tempestuous relationship with Nijinsky but, at least as staged by Doyle, that consists mainly of Nijinsky striking pretty poses and Diaghilev alternately pouting and shouting.

The actors do the best with what they've been given. Douglas Hodge, a Tony winner for his turn as Albin in the 2010 revival of La Cage aux Folles, does even more—too much more. Perhaps sensing how inert the show is, Hodge tries to liven it up by emoting as though he were in a Diaghilev-era melodrama. Several times, he literally swoons to the floor. My theatergoing buddy Bill appreciated his efforts. I was distracted by the teeth marks in the scenery.

James Cusati-Moyer as Nijinsky and Jay Amstrong Johnson as Leonid Massine, come off better because their main function is to look beautiful, which they both do. But the prodigiously talented John Glover as Diaghilev's cousin, Marsha Mason as his nanny and Marin Mazzie as his patron are wasted, functioning more as a Greek chorus than as distinctive characters.

There were far too many moments when I lost track of what role each was supposed to be serving or even where we were in Diaghilev's life. And I mean that literally. The action moves from Paris to Venice, with other stops along the way but I'll be damned if I could tell where we were.

So instead of trying to figure that out, I sat there imagining all the wonderful things Diaghilev and his compatriots might have done with a story as potentially rich as this one.