"[porto]" is a Romcom for Millennials to Love

[Porto],  the oddly punctuated romcom that opened this week at the McGinn/Cazale Theatre on the Upper West Side isn't for me. But I don't mean that as a knock against the show. Kate Benson, its young Brooklyn-based playwright, clearly aimed the show at her contemporaries, the demographic cohort we call Millennials.  And judging by the knowing laughter from the 20- and 30-somethings in the audience at the performance I attended, she's hit her intended mark. 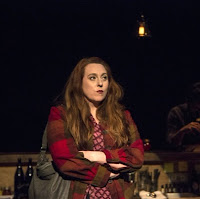 A kind of latter-day everywoman, the titular character Porto is recovering from a relationship gone sour and finds solace by hanging out at her neighborhood bar, the kind of place where the bartender not only knows your name but what you like to drink and pours it unasked as soon as you walk in.

The bar is located in hipster Brooklyn and so it serves craft beers and artisanal sandwiches like foie gras sausage rolls. Its denizens are the sort of people who profess that their favorite parts of "Moby-Dick" are the sections on the logistics of whaling. I imagine all this self-referential satire went over really big when the show played a sold-out run at The Bushwick Star last year.

But now, the Women's Project Theater is seeking a larger audience for [porto] and promoting it as something of a female empowerment tale that explores the all-ages dilemma of how a woman can be in a romantic relationship without succumbing to gender stereotypes or surrendering her sense of self.

Much of this is spelled out in a deadpan voice-over narration, delivered from offstage by Benson herself. But, at one point, actors playing Simone de Beauvoir and Gloria Steinem, take up the debate in an absurdist scene, amusingly directed by Lee Sunday Evans and imaginatively designed by Kristen Robinson. The fact that the uber-feminists writers are played by men puts an ironic spin on what they say but I can't tell how cynical it's all meant to be.

There's also a tongue-in-check quality to most of the characters, who are named for their jobs—Doug the Bartender and Raphael the Waiter—or for their drinks of choice—Hennepin (the guy that Porto attempts to hook up with) and Dry Sac (her anorexic girlfriend who despite her name seems to favor drinking vodka on an empty stomach, which is played for cheap laughs).

The one exception to these one-note characters is Porto, (although I'm still trying to figure out what the brackets in the title mean). She is presented as an average-looking woman with an above-average intelligence, a healthy sex drive and a quick wit. In short, she is, as she notes, the kind of woman who usually plays the sidekick in traditional romcoms.

But Julia Sirna-Frest makes her the anchor of this one. And she gives Porto (and [porto]) such sincere vulnerability that you almost don't need to be a millennial to appreciate it.