"Balls" Falls Too Short of Its Ambitious Goals 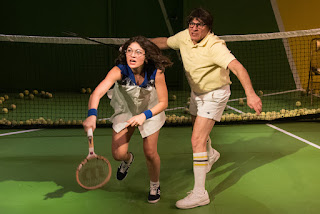 People don't usually make too big a deal about a 45th anniversary. After all, the much more impressive-sounding 50th is so close. But the 1973 match between Billie Jean King, a 29-year-old tennis star and pioneering feminist; and Bobby Riggs, a 55-year-old tennis has-been and misogynistic prankster, has been getting all kinds of attention lately.

The movie "Battle of the Sexes," as their match was billed, came out in September with last year's Oscar winner Emma Stone as King and the popular actor Steve Carell as Riggs. And now Balls, a new play running at the 59E59 Theaters through Feb. 25, is offering a highly-stylized stage version of the event.

Created by One Year Lease Theater, a company known for its physical productions, Balls goes to great lengths to recreate the King-Riggs match. The theater has been decked out by scenic designer Kristen Robinson to resemble the Houston Astrodome where the televised match took place, with covered chairs for audience members, a big, brightly lit scoreboard and the stage serving as the green-lawned center court.

Two slump-shouldered clowns greet theatergoers as they take their seats, an overt allusion to the circus-like event that surrounded the affair. Budget constraints apparently prevented the show from reproducing the players' entry onto the court in which King arrived on a litter carried by four brawny men and Riggs in a rickshaw pulled by barely-dressed women.

But the actual game is replicated almost minute by minute as Ellen Tamaki and Donald Corren, convincingly costumed and wigged by Kenisha Kelly, mimic each shot King and Riggs hit during the course of their three-set showdown.

Company member Richard Saudek served as the tennis coach and Natalie Lomonte choreographed the realistic movement. No balls are lobbed in the volleys but sound designer Brendan Aanes deserves a special shout out for matching the sound of a ball bouncing on the ground and whooshing over the net to each specific action.

Always confused by tennis scoring, I had a hard time following who was up and who was down but I was thoroughly engaged by the theatricality of it all. One moment that focuses solely on a ball moving across the court is sublime.

However, the show has more on its mind than being a live version of a YouTube experience. Like the match itself, it seeks to work on a metaphorical level and to make points about the gender politics of the past four decades.

At various points, the game fades into the background and attention is focused on a series of couples: Billie Jean's husband and her female lover, a twin brother and sister who share a mania for tennis and a disdain for homosexuality and the ball boy and girl whose 30-year relationship is anachronistically tracked from flirtation through divorce.

Each pair gets the chance to take center stage and comment on relations between the sexes. An unseen announcer throws in additional gender-related factoids that range from the birth of Bill Clinton's future paramour Monica Lewinsky in 1973 to the Supreme Court's upholding of the right to abortion with its Roe v. Wade decision that same year.

And I haven't even mentioned the appearances of athletes Chris Evert and Jim Brown or the references to the transgender pioneer Renèe Richards, although it's not clear why she's been invoked since she didn't make her transition until two years after the match.

That's a lot of stuff to cram into 85 minutes and, alas, none of the revelations are particularly fresh or insightful. And although the diverse company of actors, cast at times confusingly without regard for race, is energetic, it's also uneven.

There are too many moments when Balls resembles one of those school plays where the teacher insists that everyone has to have a part and get a chance to show off his or her skill whether it helps the production or not. In this case, one of the clowns juggles for no reason at all and another cast member leads a shaky version of the feminist anthem "I Am Woman."

Perhaps the problem may be that there were too many hands involved in the creation of so small a show (click here to read about the making of it).  Balls was directed by Ianthe Demos and Nick Flint and written by Kevin Armento and Bryony Lavery.  Doubles of this sort may work well in tennis but less so when it comes to making winning theater.