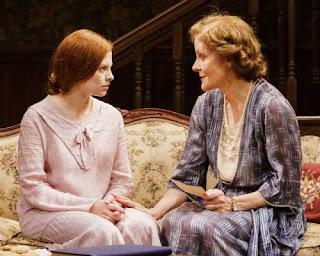 Even though he won the Pulitzer Prize for Drama (not to mention an Oscar for the screenplay of "To Kill a Mockingbird") Horton Foote was often considered to be the most unsung of America’s major playwrights. But Signature Theatre changed that in 2009, a few months after Foote’s death at the age of 92, with its landmark production of The Orphan’s Home Cycle.

My friend Joy and I spent one full day and an evening watching Foote’s nine interconnected plays about the residents of Harrison, Texas, the fictional stand-in for his real-life hometown of Wharton, and we felt as though we had fallen into an epic novel. We were sorry to see it end (click here to see my review).

Now Primary Stages has launched a new celebration of Foote with the opening of Harrison, Tx: Three Plays by Horton Foote. The company is also co-sponsoring readings, seminars and screenings of some of Foote’s screen work with the Paley Center for Media and will present the world premiere of a play by his playwright daughter Daisy Foote later in the fall.

The setting for the plays in Harrison, Tx, is the same as those in The Orphan’s Home Cycle and the situations of longing and loss are also similar. But this new grouping of unrelated plays resembles a short story collection more than a novel. Or perhaps a compilation of poems since Foote conveys so much of his meaning in the rhythm of his words and in the space that falls between the lines.

This is another way of saying that not much happens in Harrison, Tx. The first play, Blind Date, is set in 1928 and recounts a former belle’s comic attempts to find a date for her socially awkward niece.

The second, The One-Armed Man, takes place in that same year but is a far more sober encounter between a mill owner and an aggrieved former worker who was injured during an accident on the job.

The Midnight Caller, the third, and longest of the trio, centers around a boarding house and how its female residents are affected by the romantic affairs of two newcomers.

How you feel about these three musings on the vagaries of everyday life may depend on how you feel about Foote’s distinctively regional voice. And, of course, on how his work has been brought to life by the capable director Pam MacKinnon and the repertory of actors she’s recruited.

That cast is lead by Hallie Foote, the playwright’s eldest daughter and most accomplished interpreter. And, as usual, she is the most adept of the actors at conveying the stouthearted essence of her father’s characters. She’s a scene-stealing hoot as the frustrated aunt in the first play and provides an emotional anchor in the quieter role of the boarding house landlady in the last.

And there is also good work by Mary Bacon as the boarding house’s resident busybody and Andrea Lynn Green as both the niece in the first play and a young woman slipping into spinsterhood in the third (click here to read an interview with her). 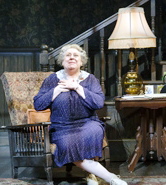 But perhaps the most high-profile member of the cast is the always-worth-seeing Jayne Houdyshell, who plays the mother-figure in the boarding house.  Houdyshell has some lovely moments and will probably ripen in the role before the show closes on Sept. 15 but, at the performance my husband K and I attended, she still seemed to be straining to capture the knowing melancholy of an old-maid school teacher who has made peace with a lonely future.

These minor plays probably weren't in the top drawer of Foote's desk.  And if you've never seen any of his others, they're unlikely to convince you of his greatness.  But if you have, they'll probably make you wistful for the chance to see a major work of his again.