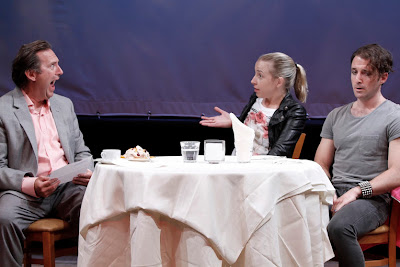 Summer is supposed to be the quiet season for New York theatergoers but somebody apparently forgot to send that memo to the folks who organized all the theater festivals that have been going on around town these past few weeks.

And now we’ve got the New York International Fringe Festival, which began last Friday and will present nearly 200 different shows before it closes on Aug. 26. I’m scheduled for a three-show marathon today and plan to post about what I see on Saturday.

In the meantime, my favorite summer theater festival may be Summer Shorts, the series of original short plays that opened a four-week run at the 59E59 Theaters last week. There are only six plays in the festival and they’re presented in bills of three (Series A and Series B) on alternate nights. And you don’t have to travel around from place to place to see them as you do with other festivals because all the Summer Shorts offerings are presented on the same stage.

The playwrights, directors, actors and designers who mount these shows tend to be pros with solid Broadway and off-Broadway credits so there’s a polish to Summer Shorts productions despite obviously limited budgets. In fact, each play is the theatrical equivalent of an amuse-bouche, a little treat that doesn’t pretend to be a full meal but still offers a satisfying taste of the playwright’s specialties.

The play groupings aren’t usually meant to be thematic but Series B, the trio I saw, might easily have been called Series G, for each of the three playlets involves gay characters in comic situations.

Two masters of high-camp humor, playwright Paul Rudnick and actor Peter Bartlett, join forces in Cabin Pressure, a monologue about a gay flight attendant who is being awarded for having thwarted a terrorist attack on his flight. Rudnick riddles the acceptance speech with non-sequitur zingers about hedge fund managers and movie celebrities, and Bartlett, under the gleeful direction of Walter Bobbie, nails almost every one of them.

Next up is Love and Real Estate, a mini-musical by Sam Davis, a frequent Broadway conductor who has branched into composing his own shows, and Sean Hartley,a book writer and lyricist whose best known credit is Little Women. They’ve updated the Three Little Pigs story to modern-day Manhattan: the piggies are now the three human Bacon sisters played by Stephanie D’Abruzzo, Sarah Corey and Jessica Hershberg; the wolf is a sly guy (Kevin Greene) who woos all three siblings and Edward Hibbert plays an Into the Woods-style narrator, whose role is more than it seems.  I can’t remember even one song from the show but its silly antics still make me smile.

Neil LaBute is a Summer Shorts regular and he’s back with his trademark misogyny in The Furies, a tale about an older and recently out gay man (Victor Slezak) whose attempt to break up with his younger lover (J.J. Kandel) arouses the suspicion and the vengeance-is-mine fury of the lover’s sister, played with comic finesse by Alicia Goranson.

Altogether, the three plays lasted a total of just 90 minutes.  Afterward, I walked over to Madison Avenue, caught a bus uptown and stopped in the 90s to have dinner at Paola's, an Italian place that my husband K and I used to like a lot but haven't been to for a while. I got an outside table, ordered a nice bowl of pasta and a chilled glass of wine.  In every way, a light, easy and savory summer evening.