Why "Into the Woods" Fails to Enchant Me 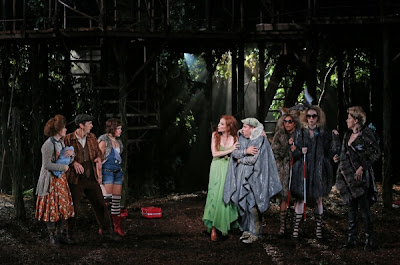 The first real writing I ever did was a reworking of Grimm’s Fairy Tales because they just didn’t make sense to my 8 year-old self. As I recall, I made them more agreeable by changing some endings and giving the princesses more backbone.

That love of fairy tales and bent for deconstructing them would seem to make me the perfect audience for Into the Woods, Stephen Sondheim and James Lapine’s musical revamping of those same fables about witches and princes, evil spells and magic wishes. But when I first saw Into the Woods during its original Broadway previews back in 1987, I was so unhappy with it that I left after the first act.

Now the Public Theater has imported a much acclaimed 2010 revival from London that opened at the Delacorte Theater in Central Park on Thursday night. I stayed through both acts this time but Into the Woods still failed to enchant me.

Most of the familiar storybook figures are there: Little Red Riding Hood, her grandmother and the Wolf; Jack of the beanstalk fame and his giant nemesis; Rapunzel and her long golden hair, Cinderella, her mean stepmother and stepsisters and her benevolent fairy godmother, a couple of charming princes and an ugly old witch.  And as though that weren't enough, Sondheim and Lapine also invented two central characters: a baker and his barren wife who are desperate to have a child.

The fun of the first act is supposed to be seeing how all the stories are tied together and all the characters brought to the point where they’re ready to live, as these stories always promise, happily ever after. The pleasure of the second is supposed to be watching how the show makes good on the old adage “be careful what you wish for.”

Into the Woods came during the second half of Sondheim’s career but still centers around one of his favorite themes:  life is a real bitch unless you can find a way to connect to someone but you shouldn’t expect any miracles even if you do manage to open up your heart and commit.

The fact that this existential reckoning is happening to fairy tale characters, the Jungian avatars of our desires, is suppose to drive the point home even further. The problem for me is that even a slightly precocious 8 year-old knows that fairy tales characters are unrealistic and so I’ve never been able to truly care about the ones who inhabit Into the Woods or to be moved, or even surprised, by their eventual fates.

The show's musical themes are similar too.  There are some lovely songs in Into the Woods, including the classic ballads "Stay With Me" and "Children Will Listen" and the underrated comic number "Agony", an anthem for the grass-is-always greener set.

But other numbers like the title song seem like reprises from other, better shows. The jaunty ditty the characters sing as they head into the woods very closely echoes the one another group sang as it set out for a weekend in the country.

Indeed, there are several almost paint-by-the-number moments in both the book (every character has to get his or her comeuppance) and the score (nearly every character gets his or her "I want" song) that made me wish I were seeing some other, more subtly drawn Sondheim show.

But that apparently is just me. The original production won Tonys for that book and that score and ran for a healthy 765 performances, longer than the original outings of Company, Follies or Sweeney Todd (click here to read about the making of that production).

The run for the current production has already been extended a week through Sept. 1 and people are already camping out over night to be first in line for the free tickets that are distributed at 1 p.m. each day.

What they’ll see is different in several ways from earlier productions. The biggest difference is that the show was originally narrated by an older man but in this telling, co-directed by the Brits Timothy Sheader and Liam Steel, a framing device has been added that changes the narrator to a small boy who seems to have run away from home and is imagining all the stories that play out onstage.  But this extra story just adds another layer to a show that already has too many of them.  And the direction doesn't help make following those storylines any easier.

The characters in this version don’t wear traditional fairy tale garb but are dressed in an assortment of styles including steampunk outfits that allow Little Red Riding Hood to combine a straw basket with a motorcycle helmet and cutoffs, while Cinderella’s stepsisters go Goth. Emily Rebholz, who took a similar approach with the costumes for Bloody Bloody Andrew Jackson, has great fun with the mash-ups and perfectly captures the self-parodying tone that Sheader and Steel have set for the entire show.

Alas, the cast has a harder time maintaining that attitude.  Sarah Stiles nails it with a delightfully feisty portrayal of Little Red Ridinghood (even her giggle is in character). And Ivan Hernandez and Paris Remillard (filling in the night my theatergoing buddy Bill and I saw the show for an ailing Cooper Grodin) are appropriately fey and funny as the preening princes. On the other hand, Denis O’Hare and the movie actress Amy Adams (burdened under the oddest-looking wig) still seem to be searching for their characters as the Baker and his Wife.

Luckily, the redoubtable Donna Murphy plays the Witch and is all by herself worth the wait on line. She isn’t called upon to rap her lyrics as Bernadette Peters was in the original production, but she is both wryly funny and heartbreakingly moving. Needless to say, she also sings the hell out of the show’s signature ballads.

And, of course, there is the park. It almost doesn’t matter what show is playing at the Delacorte if you have the good fortune to be there on a balmy summer evening.  Plus, set designer John Lee Beatty has cooked up a magical coup d’park in the second act that made even the finicky 8 year-old inside of me smile.

Labels: Into the Woods