At Home with "The Orphan's Home Cycle" 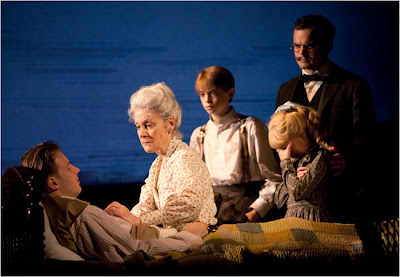 Movie fans have sequels and prequels, TV viewers have long had mini-series and now, we theater lovers have marathons. The Coast of Utopia, Tom Stoppard’s grand trilogy about 19th century Russian intellectuals, was the must-see event of the 2006-2007 season and set off the current hunger for interconnected plays that can be seen over several nights or all in one day. Since then, it seems, each season has had to have one.  Or two. I’m as greedy as the next theatergoer so I lapped up, in one sitting, both the delicious The Norman Conquests last season and the wonderful The Brother/Sister Plays that just closed at the Public on Sunday. Now, I’ve sampled the latest epic, The Orphan’s Home Cycle, nine short plays by Horton Foote that the Signature Theatre Company is offering in three parts over its entire season.

This past Saturday, while the big snow storm blanketed New York and much of the eastern seaboard, my friend Joy and I spent six hours in Signature’s Peter Norton Space, watching the first two parts, The Story of a Childhood and The Story of a Marriage, were moved by what we saw and are already looking forward to the third installment, which is scheduled to begin on Jan. 7.  That last part, The Story of a Family, will play in repertory with the others through March 28, with all-day (11 a.m. to 11 p.m.) marathons scheduled for Feb. 6, Feb. 27 and March 6.

Foote, who died earlier this year at the age of 92, based the plays on the life of his father, from the elder Foote's hardscrabble boyhood at the start of the 20th century to his days as a young father on the eve of the Great Depression. People tend to say that Foote’s plays are Chekhovian because they’re usually set in country towns (in Foote's case, the fictional Harrison, Texas) involve genteel families grappling with a changing world and don’t have much action.  This time, however, there’s a Dickensian quality to Foote's tales.

In the first two parts of The Orphan’s Home Cycle, Horace Robedaux, the stand-in for Foote’s father, is abandoned as a 10 year-old after his father dies from drink and his mother remarries a man who doesn't care for the boy and so leaves him to fend for himself. Along the way to manhood, Horace works for a crazed plantation owner who works his land with black convicts, courts a widow with small children and eventually elopes with a wealthy man’s daughter. And I’m leaving out lots of other stuff.

All these stories started out as full plays that Foote wrote in the 1960s and ‘70s and many of them have been performed over the years but in 2007, Hartford Stage, perhaps inspired by The Coast of Utopia’s success, commissioned Foote to adapt the plays into the current cycle.  He is said to have  completed drafts of all nine by the time he died in March. But Foote was a meticulous and fully-engaged playwright, who regularly attended rehearsals and even showed up at nightly performances of his plays (my husband K and I spotted him at the back of the audience when we saw Dividing The Estate last year) and I can’t help thinking that he might have done additional work on The Orphan’s Home Cycle.

I haven’t seen any of the full-length versions of the plays but there is an unpolished quality to these shorter ones.  Cuts are noticeable in some cases.  There’s too much exposition in others.  And yet, the power and emotional honesty of Foote’s storytelling comes through. It’s helped in large part by Michael Wilson’s quiet but elegant direction and the pitch-perfect cast he’s assembled, lead by Bill Heck, who plays the grown-up Horace (and his dying father) and Hallie Foote, the playwright’s daughter, who like all of the 20 other actors in the plays, assumes multiple roles and who remains the best interpreter of her father's work (click here to read an excellent New York Times profile about her). No one else speaks Foote's language, as distinctive in its way as David Mamet's is in his, the way she does, although I thought I heard a couple of the actors trying too hard to imitate her.

Watching Horace’s story unfold over six hours, allowed Joy and me to immerse ourselves in the world Foote created and to get to know his characters in an intimate way.  But if marathon's aren't your thing (or you can't get a ticket to this one) and you have to choose just one of the three parts, see The Story of a Childhood.  All three of its plays are devastatingly good.

It’s unlikely that you had a family life as difficult as young Horace’s but it’s virtually impossible to watch his story in these plays without thinking about stories of your own relatives, their idiosyncrasies and their sometimes unintended cruelties.  “It’s a reminder," Joy said during one of the intermissions between the plays "that all families are crazy.”  That's an oddly comforting thought and one that kept me warm as I made my way home through last weekend's blizzard.

Labels: Dividing the Estate, The Coast of Utopia, The Orphan's Home Cycle