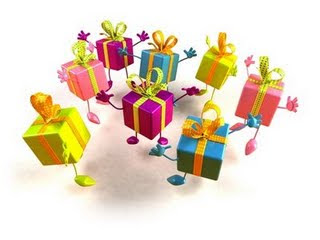 Folks give and get presents all year long but, judging by the number of recent searches for last year’s Broadway & Me gift suggestions, the intensity increases during the holiday season.  So here’s my annual list of 12 treats, one for each day of Christmas, that any theater lover would be delighted to find under the tree or Chanukah bush:

Tickets. You can’t go wrong if you give a theater lover the chance to see more shows and this year Telecharge has introduced a new gift card that can be used to buy tickets online, by phone or in person at the box office.  The cards are available in any amount from $25 to $500 at telecharge.com.


Carols for a Cure.  What’s a holiday season without holiday songs? This album features the casts from 21 Broadway and off-Broadway shows performing a mix of familiar and less so songs from the Altar Boyz company’s "O Chanukah, O Chanukah" and the In the Heights crew’s "Campana Sobre Campana" to Jersey Boys’ "12 Days of a Jersey Christmas" and Rock of Ages’ "O Holy Night." And in the spirit of the season, the proceeds go to Broadway Cares/Equity Fights AIDS. $20 at playbillstore.com


2010 Calendars.  This year’s wall calendar suggestions include something naughty (a Broadway Bares calendar with photos of 13 hunky guys who’ve gone the full monty, or nearly so, to raise money for Broadway Cares/Equity Fights AIDS) and something nice (a Wicked calendar that not only features scenes from the blockbuster musical but that’s made entirely with eco-friendly recycled paper and soy-based inks). Broadway Bares is available at Out in America for $21.99 and you can get Wicked at barnesandnoble.com for $13.45.

The American Theatre Wing Presents the Play That Changed My Life: Americas Foremost Playwrights on the Plays That Influenced Them. Every theater lover has a story about the play that first made him or her fall for theater.  In this collection, 19 of America’s best playwrights share the stories about the shows that made that difference for them.  $12.91 at amazon.com.  And for an extra goodie, you might add a ticket to the playwrights reading on Sunday, Jan. 10 at the Times Center in the New York Times building where Beth Henley, Donald Margulies and John Patrick Shanley will read their stories. $30 at artsandleisureweekend.com

The Alvin Ailey Barbie.  It’s hard to get more theatrical than the Ailey dance company, which is celebrating its 50th anniversary this year.  To mark the occasion, Mattel has created a collectible Barbie Doll dressed in the “Wade in the Water” costume from Ailey’s beloved masterpiece Revelations. $65 at aileyboutique.com

A Theatergoer’s Journal. Even in this world of blogs and tweets, there’s room for an old-fashioned journal where you can record your thoughts about the plays you’ve seen.  This one even helps you out with a ratings chart where you can grade your favorite actors, composers and designers. $16.95 at shakespearesden.com

The Playbill Broadway Yearbook. Imagine Broadway as the high school you wish you’d gone to and this as its annual keepsake filled with 6,000 photos and an insider’s view of all 78 shows that opened or ran on Broadway between June 2008 and May 2009, plus all the season’s major theatrical events from the Tony Awards ceremony to the Broadway softball championship. $22.95 at playbillstore.com

A Personalized Marquee Print.  Your name (or that of your favorite theater lover) can appear in lights on this custom-made print of a theater marquee.  Prices range from $24.95 for an 8x10 copy mounted on poster board to $159.90 for a framed print on canvas from that’smyticket.com.  It takes 2-3 weeks to produce each print so you need to order now if you want to get one before the end of the year.

The Sound of Music Pop-Up Book.  The Rodgers & Hammerstein classic debuted at the Lunt-Fontanne Theatre 50 years ago and now this new book commemorates the occasion with an illustrated picture book based on scenes from the musical. Each page includes mini-pops with lyrics from such songs as “Do-Re-Mi” and “Climb Every Mountain.” $17.81 at amazon.com 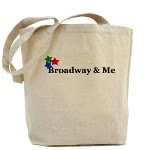 Walkin’ Broadway.  This anecdote-filled audio tour through the Broadway theater district features an all-star group of guest guides who include the too-many-great-shows-to-name-here director and producer Hal Prince and Wicked composer Stephen Schwartz. $7.95 at CityListen.com

Free for All: Joe Papp, The Public, and the Greatest Theater Story Ever Told by Kenneth Turan and Joseph Papp.   I haven’t yet read this oral history of the theater impresario Joe Papp and his founding of the Public Theater, where such landmark shows as Hair and A Chorus Line were incubated.  But I feel confident about recommending the book because I haven’t been able to pry it out of my husband K’s hands since he got a copy for his birthday last month.  $26.37 at amazon.com

Olivier's Shakespeare, the Criterion Collection. Most theater lovers have heard how great a classic actor Laurence Olivier was but this boxed set gives you the chance to see that for yourself. Just his Richard III alone, as deliciously over-the-top as a double-fudge layer cake with chocolate ice cream à la mode, is worth the price of the set. $71.99 at amazon.com

Finally, I hope you’ll forgive me if I toot my own horn, but there are also some really fun (and affordable) gifts, such as the tan tote above, at the Broadway & Me store at http://www.cafepress.com/broadwayandme

And if you're in the city, don't forget to visit the Drama Book Shop, an excellent place to wander around and find a great gift for any theater-goer!

Great list of holiday gift ideas! I have a cassette tape (yes, a tape!) of Broadway and London theater casts singing holidy songs for a Save the Children benefit. I love it - and I bring it out every year at this time. I don't think it's in print any longer. But if you manage to find it, it has some great songs!

Kate and Chris, thanks for the suggestions! Hope you find just what you want under your tree. Cheers, jan