Why "This" is Not for Me 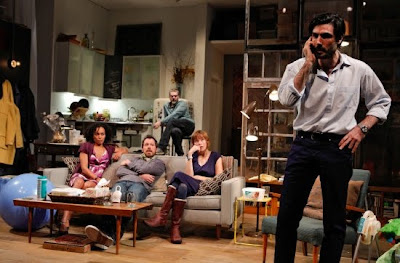 The term “comedy of manners” doesn’t get used much nowadays.  But that seems the best way to describe, This, the new play by Melissa James Gibson that’s currently in previews at Playwrights Horizons.  Except that This didn’t amuse me at all.  And that’s not just because one of its characters refers to blogs as “a large accumulation of snot.”   I can take that kind of joke.  What I can’t take is pretentious self-indulgence.  And This is full of that.

This (and what’s up with that title?) centers around a group of artsy thirtysomethings who have been friends since college and are finally dragging themselves into adulthood—two have just had a baby, another wants a more meaningful job, the fourth, and central character, is being forced to grow up by recent widowhood. Sure, they’re the hyper self-involved types we used to call yuppies but a good play could be made from such people and situations and several have been, including Gina Gionfriddo’s Becky Shaw and Adam Bock’s The Drunken City.

But while those works found fresh ways to look at familiar characters, Gibson fills her play with the shallow stereotypes and predictable ready quips of a middling TV sitcom. I had thought the pudgy, wisecracking gay friend who has no sex life of his own and is around solely to lend support to his great-looking and totally randy straight friends had gone out with shoulder pads. But he’s center stage in This and no matter how nicely played by Glenn Fitzgerald, is indicative of how superficial this show is.

Gibson pays so little attention to the plot that the characters lurch from scene to scene without rhyme or reason. The play offers two bi-racial couples and one bisexual guy.  But it doesn’t explore how either of these things affects the people involved. And it isn’t helped by Gibson's frequent collaborator Daniel Aukin, who directs the show in a similarly helter-skelter manner. The last scene has a monologue that is supposed to be an epiphany but instead wallows in totally unearned sentimentality.

Even the set is misguided.  Louisa Thompson has designed an elaborate loft apartment to be the home of a couple in the play.  It’s well appointed with a piano (she’s a musician) a work studio (he’s a carpenter) and floor to ceiling bookshelves (they’re both intellectuals).  Problem is only half of the play takes place there so the actors have to haul furniture around each time the scene changes to simulate other locations even though the loft is always visible.  Which just looks silly when two of the characters are supposed to be sitting on a park bench eating ice cream cones.

I could go on but somehow it seems bad manners to say more.