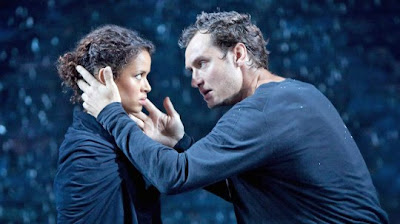 I’d told myself that I was done with Hamlet. As anyone who paid even the slightest attention in high school English knows, the play tells the tale of the young Danish prince who seeks revenge against an uncle whom he believes has killed his father, married his widowed mother and taken the throne that should have been his. For centuries now, every actor who can pull on a pair of tights has yearned to play the title part. I’ve seen more than my fair share of them and I told myself I didn’t need to see any more.

But that, of course, was before I heard that Jude Law was playing Shakespeare’s moody Dane. I’ve been an unabashed Jude Law fan since seeing him in “The Talented Mr. Ripley” and despite his spotty record in movies since then, I’ve remained convinced that he’s more than just a pretty face.  So I was eager to see what he would bring to Hamlet.

Although not apparently as eager as the woman I spotted in the eighth row of the orchestra who hauled out her binoculars as soon as she sat down.  There was a great deal to see.  Law, although, as movie stars tend to be, smaller than one expects, gives a big performance.  His Hamlet is vigorously nimble—both his body and his mind constantly moving.  And Law delivers his speeches—even the well known soliloquies—with a naturalness that makes the goings on totally accessible. He also finds bits of humor in the prince and he’s terrific in the fencing scene with Laertes.

No fight director is listed in the Playbill so I suppose director Michael Grandage should get part of the credit for the fine swordplay.  Grandage also gets credit for moving the proceedings along at a nice clip that suffers few languors despite the play’s three hour and 10 minute running time.  As its chic dark modern-dress costumes, stark set and dance-club lighting suggest, this is a Hamlet for contemporary times.  And yet, at least for me, this production, which started out in London last spring and played at the real Kronberg Castle in Elsinore, Denmark before opening at Broadway’s Broadhurst Theatre last month, fails to achieve greatness.

The supporting cast is part of the problem.  No one really stands out. Gugu Mbatha-Raw is pretty but pallid as Ophelia. Ron Cook is too prissy even for the prissy counselor Polonius.  And Kevin R. McNally is far too avuncular for the duplicitous uncle Claudius.  I kind of liked Geraldine James as Hamlet’s mother Gertrude.  But my friend Ellie, the one-time actress-turned professor who’s just finished teaching Hamlet in her class, found James too bland.

But the main problem with the production is that it’s too smart for it’s own good. Law is wonderfully charismatic and he doesn’t set a wrong foot during the time he’s on stage but I could see him thinking the whole time about exactly where he should step.  Still, it’s a treat, with or without binoculars, to watch him figure it out. Which you can do until the limited run ends on Dec. 6.

Felt the same way about the supporting cast. None of them were up to Law's caliber, except Geraldine James grew on me throughout the performance (I think I started to enjoy her around the bedroom scene).

I'm still wondering what play Ophelia was in...

I was disappointed in Orphelia, but I found the blandness of the supporting cast in general helped make the play more universal and more compelling. I like its ordinariness...and I thought Jude Law was extraordinary!

Kevin, sorry for the tardy response, particularly since you liked Geraldine James too.

And Anonymous, although your comment may not be the kind of blurb the producers would have hoped for, I love your attitude!