A Belated Toast to "Wishful Drinking" 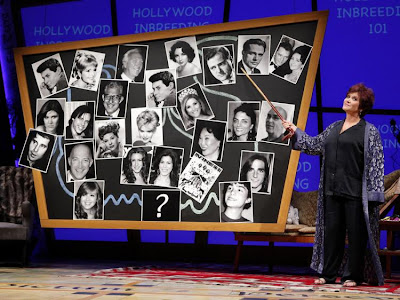 My friend Ann and I saw Wishful Drinking, Carrie Fisher’s one-woman show, weeks ago and so I don’t know why it’s taken me so long to write about it. Watching the show reminded me of the guilty pleasure I experienced reading Jane Fonda’s memoir.  Both are so cozily familiar I felt as though I were reliving my own life.  Not that my father left my mother for Liz Taylor the way Fisher’s did or that I ever had a threesome (or anysome) with the French film director Roger Vadim the way Fonda did. But the struggling-to-be-my-own-woman experiences both have gone through are so emblematic of baby boom women that it’s almost impossible for a woman around my age not to identify with them.


Of course, it is their celebrity that makes Fisher and Fonda different from me. But it is that same celebrity that makes me (and probably you) so intimate with the details of their lives. And it is celebrity—its privileges, pressures and penalties—that is the underlying theme of Fisher’s show. Barefoot and dressed in pajamas she strolls onto the stage at the Roundabout Theatre Company's Studio 54 and for the next two hours and 15 minutes dishes about the ups, downs and deep downs of her life in the public spotlight.

Fisher, who's now 53, was born in the glare of celebrity as the daughter of Hollywood’s then-reigning sweetheart couple Eddie Fisher and Debbie Reynolds.  And she has stayed there through her parents’ headline-grabbing divorce, her starring role as Princess Leia in the early “Star Wars” movies, her on-and-off-again romance with the singer-songwriter Paul Simon, her sex-drugs-and-rock ‘n roll years during Studio 54’s heyday as a disco, her numerous stays in rehab, her bi-polar disorder diagnosis, her up-and-down weight, her marriage to the Hollywood agent Bryan Lourd and divorce from him when he left her for another man (click here for a quick recap she gave in a CBS Sunday Morning interview).

Both Ann and I had read Fisher’s memoir and novels, which make use of the same material, and so we were familiar with her stories.  But Fisher knows her way around an amusing anecdote and a punchy one-liner (and she’s equally adept with the fast ad-lib as she demonstrates with an audience Q&A segment in the show).  So Ann and I laughed at things like the "Hollywood Inbreeding 101" tour through her family tree that she’s had mapped out on a blackboard and her riff about how it feels to have the image of her 20-year-old self on all the Princess Leia paraphernalia from tiny action figures to life-size inflatable sex dolls.

There is a therapeutic quality to Wishful Drinking, which Fisher has been touring around the country over the past three years and which is scheduled to end its four-month New York run on Jan. 17.  The show is a textbook case of laughing to keep from crying.  You get the feeling that if Fisher weren’t onstage telling you these stories, she might be out in the real world living even worse ones.  But the support doesn't flow all one way because you also get the feeling that if she can live—and still joke about it—through the mess of her life, then you ought to be able to make it through the mess of yours.

The show could have been shorter but Fisher still got a standing ovation from an audience filled with middle-aged women the night Ann and I saw it.  Although I didn't see the music impresario Clive Davis, sitting a few rows ahead of us, applaud at all.  But what does he know?  He’s a guy.

you are spot on as usual.