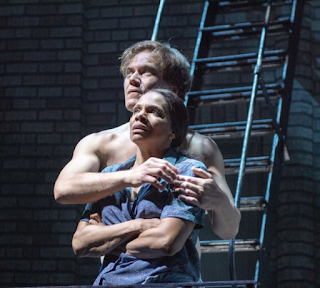 Even in our #MeToo era which tends to frown on too much male persistence, it’s hard not to be seduced by Matt, Pale and Johnny who get to do all the fun things and say nearly all the great lines, as Adam Driver does with his Tony-nominated performance in the current revival of Burn This, which is now playing to sold-out houses at the Hudson Theatre.

And even though six-time Tony winner Audra McDonald is unsurprisingly winning as the love-averse waitress Frankie in the new production of Frankie and Johnny, its MVP is Michael Shannon who brings his own prodigious charm to the role of the tirelessly romantic short order cook Johnny (click here to read more about the making of the production).

Shannon cut his acting teeth in Chicago where he worked with the Steppenwolf Company. I first saw him when he did the one-man show Mistakes Were Made back in 2010. But people in the know already knew how terrific he was. A group of young guys who looked to be acting students stood up at the curtain call and chanted his name.  Frankie and Johnny shows that he's lost none of his power.

The show takes place in real time, picking up right after the title characters have made love on their first date and are trying to figure out what comes next. Frankie wants to take things slowly but Johnny is determined that they should make a full commitment to one another and woos her with confessional stories about his past, romantic music from a classical radio station and food he cooks up to satisfy their post-coital hunger.

My friend Ellie was so taken with Shannon’s performance that she’s been Googling him ever since we saw him last week and has been sending me daily updates on her deepening infatuation. And I can understand why.

Over the past few years, Shannon has been playing heavies in movies and so it’s a pleasure to see him be as funny and as sexy (warning: there is full frontal nudity in Arin Arbus’ artfully directed production) as he is here. He makes a great cut-up.

And yet this marvelous actor never loses touch with the underlying melancholy that his Johnny is fighting against as he tries to persuade himself, as much as he does Frankie, to take one more lunge at the possibility of happiness.

Yes, the play is somewhat dated and it’s a stretch of the imagination to think of McDonald or Shannon as sad-sack losers. Plus the play goes on far too long. I would have been satisfied if it ended with the first act’s curtain since the second act pretty much repeats what happened in the first. But with big-hearted support from McDonald, Shannon makes you fall in love with him and with the possibility that love truly can heal all wounds.

Labels: Frankie and Johnny in the Claire de Lune