Why "Public Servant" Fails to Get My Vote 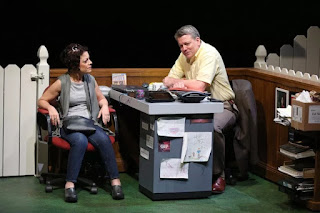 Theater loves dysfunctional families (the Weston clan in August: Osage County, the Tyrones in Long Day’s Journey Into Night; generations of the House of Atreus) so the determined-to-get-along families in Bekah Brunstetter’s plays take some getting used to.

And it may take even longer for some liberal New York theatergoers to embrace them. For while Brunstetter’s female protagonists are politically progressive, their relatives—the people they most love—tend to be pro-life, anti-gay and patronizing, at least initially, toward people different from them. But Brunstetter, the daughter of a conservative North Carolina politician, is on a mission to show the warmer side of these MAGA types.

In The Cake, which ran at Manhattan Theatre Club earlier this year, a baker refuses to make a wedding cake for her beloved goddaughter because the young woman is marrying another woman but still managed to come off as lovable. Now, in Public Servant, a Theater Breaking Through Barriers production that is playing in Theatre Five at the newly renovated Theatre Row through next weekend, a conservative county commissioner named Ed Sink is confronted with two issues that challenge his values and manipulate the empathy of the audience.

The first is a constituent’s request for Ed to stop pushing a building project—a community pool—that may benefit the town but will gut the value of the home she’s inherited from her mother. The second, and more important one, is that Ed's teenage daughter Hannah has returned home from college with liberal ideas and a decision to make that will go against everything her parents have raised her to believe.

Theater Breaking Through Barriers is a company that promotes artists with disabilities and so the sympathy deck is stacked because the constituent Miriam is not only written as a woman with cerebral palsy, played by Christine Bruno who also has the condition, but is desperately trying to conceive a child and needs the money from a sale of her mom’s home for fertility treatments.

But as conceived by Brunstetter, a writer on the feel-good TV show “This is Us,” and disarmingly played by Chris Henry Coffey, Ed is a guy who so clearly wants to do the right thing that we can’t help rooting for him.

In fact, the entire play wants to do the right thing. But the strain of doing so shows in its improbable plot developments (Miriam and Hannah, played with just the right amount of naiveté by Anna Lentz, become allies) and its unrealistic denouement (including a potential reconciliation between Ed and his unseen bipolar wife).

It's not that people don't change their minds or find a place of compromise but it's not unrealistic to expect our playwrights to wrestle with how they get there. Here they just suddenly and inexplicably do.

Even the set reinforces Brunstetter’s idealistic message. It features a series of white picket fences that, cleverly designed by Edward T. Morris, swing open to display mini-sets for Ed’s office, Miriam’s backyard and a clinic Hannah visits. But they’re also metaphors for the adage that good fences make good neighbors and that we might all get along better if we just respect each other and try not to trespass on one another’s beliefs.

It’s a nice sentiment, particularly in these polarized times and the play itself, under the light-handed direction of Geordie Broadwater, is pleasant. But while I may find comfort in the easy resolutions on Brunstetter’s TV show, I expect more intellectual rigor from my theater and Public Servant fails to deliver on that.