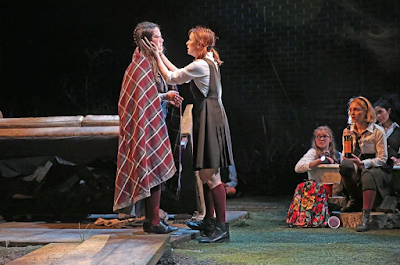 In the journalism business we say three occurrences make a trend. British director Phyllida Lloyd fast-tracked the trend of women performing traditionally male roles in Shakespeare’s major tragedies when she not only cast Harriet Walter as Brutus in Julius Caesar, the title role in Henry IV and Prospero in The Tempest but surrounded her with all-female supporting players. Lloyd was clear about why she did it: she felt there weren’t enough similarly dynamic roles written for women.

Joining the trend this year has been Glenda Jackson and her portrayal of King Lear, which she has done largely because she’s Glenda Jackson and she wanted to. And now comes Red Bull Theater’s all-female version of Macbeth, which has been done…well, I don’t know why it’s being done.

And that’s the primary problem with director Erica Schmidt’s adaptation of the Scottish play that has seven young women performing all the roles in what has been given the two-word title of Mac Beth.

The women, all dressed in the same schoolgirl's uniform of grey jumpers, knee socks and Harry Potter-style tartan capes, speak the Bard’s language. All Macbeth’s many familiar lines are there. But so are all the talismans of contemporary girlhood: cellphones, selfies and references to Beyoncé.

Mac Beth, which is scheduled to run at the Lucile Lortel Theatre through June 9, clearly wants to say something meaningful about how horrid high-school girls can be to one another. But it comes off more like a drama club production of Macbeth at the kind of all-girls high school I attended, where the tall girls played the most masculine roles and the darker-skinned girls played the funny sidekicks.

This group of girls gather in a setting made up to look like the town dump strewn with abandoned furniture and muddy pools of water. They carry all their props in their backpacks. During the banquet scene, Lady Macbeth reaches into hers and pulls out Twizzlers which she hands around to her guests (click here to read more about the making of this production).

But Schmidt doesn’t provide any real context that explains who these girls are, what their relationships are to one another or why they’re doing Shakespeare in the first place. Instead, there’s just lots of screaming, giggling and running around the stage. Plus a couple of butt-shaking dance sequences and some splashing around in a very long rain scene that made me worry about the health of the actors.

And because there are only seven actors playing the tragedy's two dozen or more parts, it can get confusing trying to keep track of who is supposed to be who, even if like me you’ve seen the play nearly a dozen times.

That’s not to say there aren’t some good performances. Most critics have heaped praise on Ismenia Mendes who plays the sole female role of Lady Macbeth (Schmidt cut the Lady Macduff scene) and Mendes is quite good. But I was even more taken with Lily Santiago’s Macduff.

The scene in which Macduff learns that his wife and children have been slain was the only time during this production's 100 intermission-less moments when the true depth of Shakespeare's tragedy hit home for me.