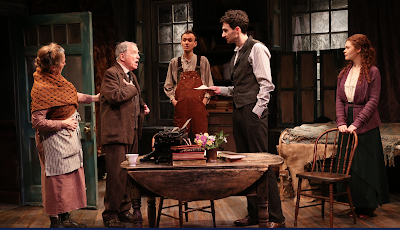 Repertory theater used to be the norm. A company of actors would present a revolving series of plays with cast members assuming the lede in some and supporting roles in others. Which meant audiences could see the same guy playing the fiendish Iago at one performance and taking on the role of the foolish Malvolio at the next.

Nowadays however, few companies can afford to keep large numbers of actors on their payrolls so it’s particularly admirable that the Irish Repertory Theatre is living up to its name and giving theater lovers the chance to see the same group of actors take on various roles in the three plays that make up its tribute season to the playwright Sean O’Casey, rotating the productions at alternate performances and running all three on Saturdays through June 22.

O’Casey wrote about 20 plays in a career that stretched into the 1950s but the three the Rep has chosen—The Shadow of a Gunman, Juno and the Paycock and The Plough and the Stars—are acknowledged to be his masterpieces.

Written over a three-year period between 1923 and 1926, the plays are known as the Dublin Trilogy. And although each stands on its own, together they form a chronicle of Ireland’s violent struggle for independence from the British in the early decades of the 20th century.

O’Casey centers his stories around the ordinary folks who populated the margins of that civil war. Each play takes place in a tenement apartment and set designer Charlie Corcoran has transformed the entirety of the Rep’s recently-renovated theater into a replica of a working-class Dublin neighborhood, complete with brick walls, lantern lampposts and laundry hanging on lines above the heads of audience members.

Motley assemblages of rundown furniture distinguish the different homes onstage. The appropriately shabby costumes, all by Linda Fisher and David Toser, underscore the hardscrabble lives of the people who wear them.

The three productions are staged by different directors but the core cast remains the same (click here to read an interview about the process with one of the actors) and among the many rewards of seeing all three shows is seeing what each director does with those similar ingredients.

O’Casey gives them a basic recipe that introduces a collection of stock characters, involves them in seemingly comedic situations and then slowly heats up the stakes to the level of tragedy.

It’s a meaty acting challenge that calls for actors to bring nuance to such stereotypes as the blustery drunk, the sensitive poet, the stalwart mother of the earth or the neighborhood busybody and to deftly modify their performances as the tone changes.

I found the results to be mixed but I also found things to admire in each production. The Shadow of a Gunman centers on a young writer who is flattered when his neighbors mistakenly suspect him to be an IRA assassin but is later forced to make life-and-death choices after a radical friend killed by government forces leaves him with incriminating evidence.

Perhaps it was because I saw it first back in February but Shadow, directed by the Rep’s co-founder Ciarán O’Reilly, turned out to be my favorite. The story was compelling, the performances were convincing and, importantly, the faux Irish accents the actors adopted were easy to understand. Despite years of theatergoing, it was my first encounter with an O’Casey play and I left eager to see the next one.

That turned out to be Juno and the Paycock, named for the main characters, a long-suffering wife and her ne’er-do-well husband who can’t seem to find a job and drinks up the little money she manages to earn as a charwoman. All their troubles seem over by the end of the first act when news comes that a distant relative has left them an inheritance and their daughter falls in love with a school teacher. But those happy events also contain the seeds of the misfortunes that will destroy the family, including their son who’s accused of being an informant against the IRA.

The best known and most popular of the trilogy, Juno and the Paycock has been made into a movie, adapted three times for TV and was the basis for the short-lived 1959 musical Juno written by Marc Blitzstein and Joseph Stein. Neil Pepe, who has a day job as artistic director of the Atlantic Theater Company, helmed the Rep’s production with varying success.

I don’t know if the actors were overtaxed by the strain of performing Shadow at night, while rehearsing Juno during the day but this second installment struck me as wobblier than the first. The humor in the first act seemed forced and the tragedy in the second rushed. The accents became more labored too and for stretches, neither I nor my friend Mary Anne could understand what some of the characters were saying. 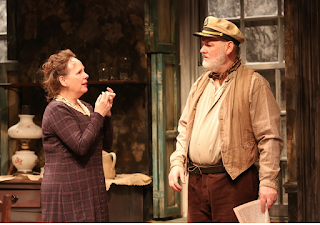 The saving grace was the vanity-free performance by Maryann Plunkett, who joined the ensemble to play Juno. With just the tightening of her lips, Plunkett makes you feel the years of disappointment this woman has experienced and her determination to keep going. It’s a masterclass in stage acting and is probably the main reason the Outer Critics Circle gave the show a nomination for Best Revival.


Last week, I saw the final installment of the cycle The Plough and the Stars, which takes its name from the flag adopted by the Irish republicans. This play, which was so controversial when it debuted at Dublin’s famed Abbey Theatre that it sparked riots and caused O’Casey to leave Ireland and settle in England, is set at the time of the bloody 1916 conflict known as the Easter Rising. Nearly 500 people were killed that day, many of the rebellion’s leaders were later executed and the British sent hundreds more to internment camps, earning the enmity of Irish loyalists for decades to come.

Again, weariness seems to have gotten the best of the cast and there were stretches of overly-accented dialog that I couldn’t understand. It also took too long to figure out all the relationships between the characters. But, under the direction of the Rep’s artistic director Charlotte Moore, the show still manages to get across O’Casey’s disillusionment with all sides in the conflict.

Both the Catholic and Protestant views are represented in these plays but there are no true heroes or villains. What O’Casey is saying in a warning that carries across the centuries to our own time is that when people in a society turn on their neighbors, everyone becomes a victim.

Labels: Irish Rep, Juno and the Paycock, Sean O'Casey, The Plough and the Stars, The Shadow of a Gunman